The weather is hot; too hot for some, including me, as a typical Englishman, I start to wilt around 25c. Open-air market;  stalls covered in sun-shading canvas, offers fresh produce, fruit, vegetables but also fresh fudge; free sample sometimes leading to a box full!

Opposite the statue of King Alfred the Great is a park with beautifully laid out gardens including multi-colored flowerbeds and a stream running along the side.

An ice cream stand provides delicious ‘real ice cream’. My favorite being salted caramel but any flavor would tempt a passerby.

There is something about an outdoor market that indoor shops lack. An atmosphere of past times when everything was locally produced.

What else is essential on market day? Outdoor cafés; people sitting, relaxing chatting about anything and everything. Scent of coffee, freshly baked pastries including iconic English scones, butter, ‘clotted cream’, and strawberry jam. ‎ Too tempting to walk away from!

There is a continental feel. All along the High Street,  outside almost every shop hanging baskets display gorgeous ‎flowers. Early morning there is the sound of ‘drip drip drip’ as water feeds them in preparation for another hot day.

Accompanying this delightfully easy, relaxed atmosphere, street musicians enhance the backdrop with heavenly sights and sounds. Another sense takes over. A variety of music from Bob Dylan to an amazing opera singer. Attire, formal suit with tails. I just have to go and chat with ‘Bob Dylan’ asking him to sing ‘Mr. Tamborine Man’. A favorite. I sit outside a nearby café and force myself to enjoy a double espresso and…….an almond croissant perhaps!
‎
An ancient 12th-century structure; ‘The Buttercross’ leads the way to The Square. Truly ‘Continental’; cafés adorn this wonderful square, from which the front of  Winchester Cathedral can be seen.

Some years ago a visit to town would be incomplete without enjoying a double espresso ‘rocket fuel’‎.  One day I was sitting outside a popular café reading the International Herald Tribune. I used to travel a lot for business and this newspaper was indeed international. 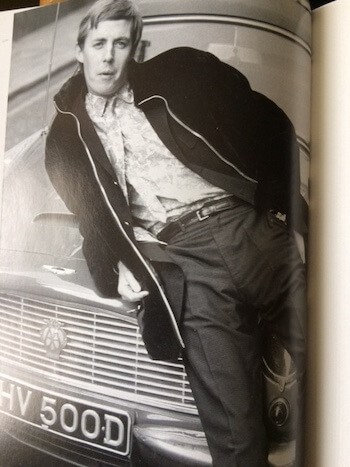 Winchester is renowned for its friendly culture and a chap sitting nearby asked me why I was not reading the Daily Telegraph, after which I provided a brief explanation. The conversation expanded and we introduced ourselves.  Simon Dee was his name. That was a shock!  He did not look like the Simon Dee of his heyday as a famous Disk Jockey and TV host.  The English will doubtless know instantly who he was; especially women who just loved this chap in the late 1960s, and 70s!

Simon Dee was a famous ‘disk jockey’ with a radio show and later a TV show. ‎ One photograph shows him surround by attractive young women as he sat on his e-type Jaguar and the photo features a 1967 Aston Martin. He was quite an icon in his day. Famous, smiling face, sense of humor. Sadly he fell out of favor with a TV company where he was being paid megabucks but wanted more.  Eventually, he decided to create documentaries. But each one was ‘blocked’, he explained. We used to meet occasionally if he happened to be at the café.

Sadly, he passed away a few years later in August 2009, having become a shadow of his former self. Such an individual who achieved ‘the sky’ disappeared from the public eye as if he never existed. I do have his biography which really takes you back to ‘old times’.

‎The next chapter will accompany the reader on a classical walk around England’s former capital and home of Alfred the Great, King of Wessex.

Clouds and Humans – Synergy and Imagination