Doing Stand-Up Comedy: What It Taught Me About Life and Business

It is not a question of if, but a matter of when.  There will be a time for all of us when we bomb.  We may not understand or accept why it happens, but it will happen inevitably.  How we bounce back and what we do to react is entirely in our court. In fact, it is said that until you bomb, you really are not a true comedian. Think of how many successful people you look up to in life who write or talk about getting fired, losing a business or having some huge failure in their lives.  It has been through these failures that they have learned to succeed without fear of failing.

In comedy, this is more present than anywhere.  Night after night you judge your success on the laughter of the audience.  Your self-worth is tied to others’ reactions to what you are saying on stage.  And when you get no feedback from the crowd your instinct may be to crawl up in a ball and not leave your house for weeks. But this reaction would only make it harder to ever get back on stage again.  When we have any failure in life, just as the crew from the plane going down, we need to bounce back fast.  The sooner we bounce back, the easier and better it will be.

Know that you will bomb.  Once you accept that it will happen at some point in life, you will be able to view this as part of your growing success, rather than an end to the success you have been building on.

How great would it be if after being fired or losing a business you could think, “Yes! I am so much closer to the bigger successes coming my way!”

Walking up to the stage the first night, my breathing got tight, I was short on breath and forgetting the order of my set before I even made it to the center stage. I tried to understand what was happening, after all, I have spoken in front of a much larger audience frequently.  I had no fear of public speaking, but this felt different. Walking into the lights on center stage, I lost confidence by this sudden onset of nerves and fear of failure. The first thing that I looked up to see was a blinding light and from that moment forward I just tried to pull together what I could to get through a very long three minutes in front of what I felt had to be the biggest critics of comedy the world could put in front of me: my audience.

The surprise onset of nerves really got me thinking over the next few weeks as I prepared myself to bounce back from my first try.  I finally abandoned the thought of finding the reason why so that I could eliminate the possibility of them ever coming back again.  Instead, I accepted that they could surprise me with a drop-in visit at any time without warning.  Like in-laws knocking on the front door when your car is parked in the driveway, I would have to learn to answer the door and work through the awkwardness that was thrust upon me when it was least convenient for me.

Just as I began to accept that bombing will be a part of my future and integral to my success, I began to accept that nerves will be as well.  Learning to deal with them became my new focus.  Now before my performances, I focus on breathing and on not overthinking the set, the event, or audience before me.  My getting ready focus changed from worry about what to remember to slow down to bring peace to my mind and slowing my breathing so that when my feet first meet the stage, my mind is at peace, my body shows confidence and my words flow without hesitation. Nerves will happen, plan on them and practice whatever works for you to not let them keep you from your success.

It was right before our graduation show from comedy class when someone asked for advice on how to control our nerves. After adding a few ideas of advice, Andrew added that we do not have to go on.  As he said, we do not have to go on stage and who would ever know the difference? Think about that in life.  How many dreams can you just simply choose not to pursue, not to take the risk without anyone ever knowing the difference? But he also added that you will know.  And that is what makes all the difference.

How many things have you simply chosen not to do?  How many times have nerves held you back? It’s your choice. You do not have to go on, but if you do not, no one will ever have the chance to hear your story.


Record every set! This is one of the first lessons in class.  Always record what you do so that you can later listen to yourself and look for improvements. As I started listening to my sets I was surprised to find that some nights I could walk off the stage with less than overwhelming thoughts about how my story was received by the audience.

This changed however on the ride home as I played back my audio recording.  Bursts of laughter and slight giggles were audible in places that I had not noticed on stage. People were laughing.  This gave me hope to keep to the story I was telling.  It is working even when you do not notice the reception from your audience.

Just as in life, many times our focus on success gets in the way of seeing others’ perception of the value we bring.

Have you ever experienced frustration in your career or with your life goals only to be surprised to hear a friend comment on the level of success they see you reaching?  Do not make the mistake of giving up too soon because you do not hear the laughter of others.  Hopefully, if your career is anything other than a comedian, it is metaphorical laughter, but if you are a comedian, stop and listen for the laughter. 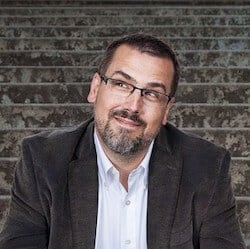 Andy Vargohttp://www.awkwardcareer.com/
Keynote speaker, life coach, author and entertainer, Andy Vargo is all about helping you live your best life by learning how to ‘Own Your Awkward’! If you ever feel awkward about yourself, then you can understand how Andy Vargo lived the first forty years of his life. Coming out of the closet at forty doesn’t define him, pursuing his passion to help others does. During the day, Andy works corporate and school events as a motivational speaker and helps people master life changes as a one on one life coach. At night you can find him working stages around the northwest as a comedian making light of his journey with the gift of laughter. Awkward is not only his brand, but his style as Andy encourages each of us to ‘Own Your Awkward’ and be true to your genuine selves. In addition to authoring the Awkward Journal Series, Andy hosts the podcast, Own Your Awkward, co-hosts the Be The Better Local Show on BD Local and shares thoughts and ideas in his blog and video series available at awkwardcareer.

How Comfortable is Your Prison?