Not to gloss over it blithely, but the products of Silicon Valley, Detroit, China, Russia, India, all over the world, were prototyped in these works. These products are material and conceptual. Analog and critique. Figure-ground. The last 18 months, from February 2020 to August 2021, were prototyped in those books and films, some call it Design Fiction, some simply call it emergent narratives. There is a Great Reset. It doesn’t matter if you believe it was planned or engineered, it’s happening now. And even with all the images of dystopia we collectively reference and supposedly understand, we’re still divided. Why exactly is that?

Before we continue… let me ask, have you yet been redpilled?

Some cast these foundational pills onto political parties. Red or Blue state? Is that blood in your veins, or Windex? Cherry, or… “Blue Hawaiian” flavor? Are you living in reality… or the siMuLaTiOn? 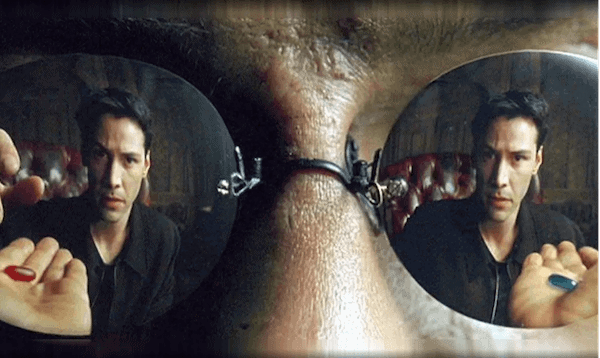 Feels maybe a little outdated, oversimplified, cringe? Perhaps then a better question is:

That is to say, have you read this book? (I’ve never read the French, nor could I, but if I could, I would) 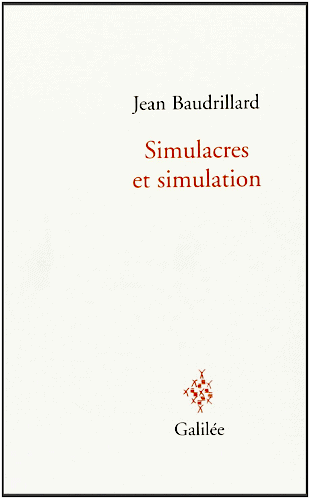 I’m not going to pretend to be a Baudrillard expert here, but I will make the arrogant statement that if you have not read this book or attempted to understand at least some of the ideas in it, or if you have not done the same for Symbolic Exchange and Death… you are, as they say among the very online, ngmi.

And I say this with nothing but love and concern, because no matter how many images of dystopia we reference and calls for alarm we sound, we are simply awash in referential images of dystopia which are (mostly) lacking the key to unlock it. The result is fear, dread, a state of suspended animation, and deepening division in which we’re unable to understand the age-old question: What are they doing to us?

I don’t know if Baudrillard’s takes on capitalism and America are indictments as much as observation of human nature, and I don’t really care to take the argument to its extents in terms of systemic or political causes or solutions, because those have now become the realms of intractable “debate” and nothingspeak. I’m most interested in focusing on a simple concept, in which Baudrillard explained what he felt was the function of Disneyland, which for me was a crystallizing entry point to his thinking, as well as the catalyst to my own emergence from a long period of frustration and grief about the state of the world:

Whence the possibility of an ideological analysis of Disneyland (L. Marin did it very well in Utopiques, jeux d’espace [Utopias, play of space]): digest of the American way of life, panegyric of American values, idealized transposition of a contradictory reality. Certainly. But this masks something else and this “ideological” blanket functions as a cover for a simulation of the third order: Disneyland exists in order to hide that it is the “real” country, all of “real” America that is Disneyland (a bit like prisons are there to hide that it is the social in its entirety, in its banal omnipresence, that is carceral). Disneyland is presented as imaginary in order to make us believe that the rest is real, whereas all of Los Angeles and the America that surrounds it are no longer real, but belong to the hyperreal order and to the order of simulation. It is no longer a question of a false representation of reality (ideology) but of concealing the fact that the real is no longer real, and thus of saving the reality principle.

Baudrillard, in describing the “hyperreal,” uses Disneyland as an example of what could be argued is the attempt to conceal the fact that what lies outside its literal “gates” is no longer real, (LA and America beyond it.)

I once recounted to my students an experience of a trip to Venice in grad school, in-flight to which I re-read S&S. As one might imagine, in such a scenario Venice quickly becomes Disneyland, inasmuch as any European city, but in archetypal spades, with gondolas, the rising waters, the pigeons of St. Mark’s square, the bells, the narrow allies, and waistlines.

I told myself I’d ruined my ability to “enjoy” Venice by reading that book, but it was soon clear I could easily enjoy Disneyland. With little shame. Almost 20 years earlier I’d visited Anaheim Disneyland at night under the influence of my first dose of psilocybin, before ever reading a single page of Baud or anyone of the sort, maybe obligatory recitations of Decartes, Kant, Hume, with very little or no retention.

Water flowing from a forgotten spigot in the middle of a patch of grass immediately transformed the entire park into a sinking island, reactions from ride-goers were performative and absurd, Tigger was observed smoking a cigarette in a strange thruway between attractions I could probably never find again. Nothing about the experience was as I expected it to be. I spent the entire time laughing at, and enjoying, being thankful for, the genius of artifice.

Admittedly it was very hard to see anything in the same light after that experience, the entire landscape of Southern California Rich Kids in the late eighties was tough to swallow, and I didn’t last more than a few more months before departing for the Midwest, where people were supposedly “keeping it real.” I loved the midwest in the early nineties, but they were of course not keeping it any more real, and in retrospect, I absolutely loved LA (then) and everything about my experience was incredible, including cocky ignorance and continually deplorable choices. We will simply never live in that world again, and I’m incredibly fortunate to have experienced it. Anaheim Disneyland, albeit like everything else, suspended in a strange and absurd COVID fog, is still there today. I’d like to return someday, with my son.

Venice in the 2000s, post-9/11, eerily existing long after it should have fallen into advancing waters, long after it functioned as a “real” city, maybe even close to a century after it became a pure idea or a monument to a city, was still standing, flooded with tourists, yes, underwater, bursting at the seams with garbage, but still standing. In a way its transition to symbol or simulacrum wasn’t a tragedy, the ability to withstand that soul-crushing test was maybe even the most romantic thing of all. 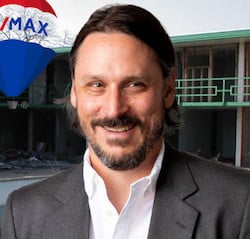