Welcome to Synopsis 360° “Where Content and Community Connect.” Every month we examine a topic or theme via a book, article(s), podcast, video, or poem and engage in lively conversation.

August 3rd event: “We, The Corporations: How American Business Won Their Civil Rights” by Adam Winkler — A book (with alternative articles that provide context if not able to read the book – available on the Session Preview.)

This month’s Synopsis 360° focuses on some of the “behind the scenes” mechanics of our American government.  The author, a professor of law at UCLA, has compiled a ton of research into why American corporations wield so much power and influence over the government and weaves it into a fascinating history. 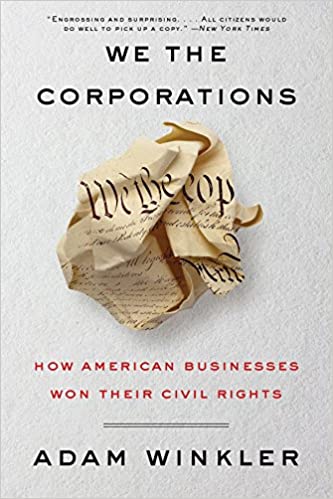 concentrating too much power in any one place or allowing commercial monopolies unlimited control.

Like many of the battles being fought today about politics and economics, the early discussions were heated and often angry, with sides digging down into their belief and intellectually warring with those who disagreed.

Once decisions were framed within the Constitution and amendments, case law took over to bring specific clarity to the compromised and generalized ideals of the new country.

Initially, case law gave property rights to corporations to salute the fact that a corporation is more than the sum of those people who own/run it.  As the country grew, case law created more and more precedents about the rights of corporations, making decisions to resolve disputes around the railroads, oil companies, and automobile manufacturers.    The question of “what, exactly, is a corporation” snuck up on many of us that didn’t follow the repercussions of those decisions.

Winkler takes the reader through court decisions that influenced race and civil rights, the impact of marketing on building a power base for corporate products, and ultimately to Citizens United, decided in 2010, which gave corporations the First Amendment right to “spend their money to influence elections for public office.”

This book is about more than economics or politics. It is about how things really work, and why.  For anyone questioning how we got to the point where our country is today, this book provides exceptional insight. Click here for the Session Preview.

Join us on August 3 at NOON Eastern for “We, The Corporations.”

It’s Not a Joke. HR Can (and Should) Facilitate Change