Communicating with All of You

You may have noticed that I weirdly capitalized “All of You” in the header. “All of You” doesn’t indicate that I think you are a group – or you have multiple personalities.

The big “All,” indicates that I want you to give attention to personal things you normally wouldn’t entertain your neighbor with at a dinner party or put in your LinkedIn profile; perhaps inside there is a 3-year-old “You“ or a 13-year-old “You” with some old stories.

Don’t stay there now; just remember that regardless of what you may initially believe, some of these stashed away secrets may be your true treasures.

Let us look at a model that has been around for a long time; The Johari Window. It was conceived in 1955; you may even know it or have been exposed to it.

According to the model, what is “You,” can all be drawn as a big box.

You know a lot about you: When you were born, your favorite flavor ice cream, your shoe size, whom you had a crush on in 7th grade…

But there are also facts that you don’t know about you. You may not be aware that when you are stressed, you click your pen driving your coworkers nuts. Or that you very often apologize before you speak. Or use a word in the wrong way. Or that you are the person everybody in the organization trusts. Or…

Look at the graphic; let the whole box be “All of You”.  Let’s first start talking about the things you know, the left half of the window. 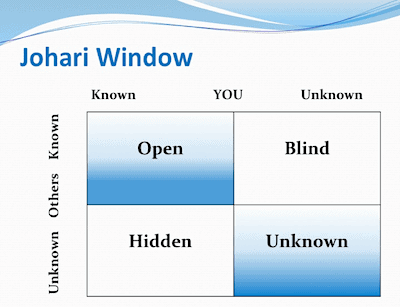 The things you know about “You,” are divided into what you are Open about (the top left) and what you – unknowingly or knowingly for whatever reasons – Hide (the bottom left).

The Open part is obviously not very controversial; at least not to you. So let’s move on.

There can be perfectly good reasons to keep some things Hidden. Disclosing your age in the workplace may not be wise if ageism is rampant where you work. In my country of birth, Denmark, one’s birthdate is a part of the local equivalent of the Social Security Number. It is commonly included in resumes, and birthdays may be celebrated both in and by the company one works for.

Some things may be hidden just because there hasn’t been a good reason to disclose them, not because you specifically want them to be secret. Usually, we don’t disclose our birthdays as the first thing we tell strangers, not even in societies where birthdays are public knowledge. Most things are left unsaid if they are not relevant to the context.

When people don’t know much about you, they start making their own little stories about who you are based on their prior experiences with people who either look like you, talk like you, share your job, are your age… not from an explicit wish to pigeonhole you but because they have little else to go by. People are hardwired for categorizing and they generally don’t like uncertainty.  These little stories are what we call stereotypes.

Story-writing happens even when all parties involved act in good faith. If the people you are communicating with have strong preconceived notions around people who look like you, talk like you, share your job, are your age… it gets way more complicated.  Let’s save that conversation for another day.

Next are the things you don’t know, the right half of the window.

Some of them are common knowledge among your family, friends, and/or coworkers. These are your Blind Spots (the top right).

You can learn more about them by asking for feedback.

As an immigrant to the US, I often ask for feedback on my use of the English language. Perish the thought, that I unknowingly walked around insulting people by using an expression in a wrong way.

Sometimes “feedback” comes as part of a normal conversation.

After MC’ing at a party where everybody – including the waiters – were laughing their heads off, one of the guests that I had known for a decade said, “I have never seen you like that before.” I took away some indirect feedback that I had set a goofy side of myself in the corner.  I noticed that I kind of missed that part of me and I have since worked at getting it back while pondering why it slipped in the first place.  It is still a work in progress.

Often we get the feedback without asking, when we are not ready for it, or it is delivered in an unproductive way so we can’t accept it.  Once we are defensive, it is difficult to benefit from any feedback – as well-intended as it may be.

I was initially defensive when I learned that I was being too direct with people I didn’t know well. Ouch, I was unknowingly pushing people away. When I later reflected, it made sense: as a Dane, I am not only a learner of the language; I also carry a different tradition for small talk – it is really more of a “non-tradition”. Understanding the “why,” behind not only my own behavior but also why it didn’t sit well with other people made the feedback welcome – in hindsight.  Now becoming better at small talk is one of my learning goals. Still a work in progress.

A lot of feedback is not even verbal; it is in the raised eyebrows, crossed arms, non-replies, or exuberant greetings. Most of us are experts in body language (at least when we communicate within our own culture.) Zoom is making this language a new art form that we have to learn together.

Finally, there is the Unknown area (the bottom right); things about you that neither you nor other people are fully aware of. Some of these things are what psychoanalysis was made for. One of the fathers in the field, C.F. Jung, talked about the shadow, the parts of us that we deny.  Sigmund Freud talked about things pressed into the subconscious by the Id – the “I in charge” – because we didn’t/don’t know how to handle these “things”.

Regardless whether they are Blind or Unknown: the parts of us that we don’t take ownership to have a tendency to creep up upon us and kick us in the pants at inconvenient times.