We communicate every day, for a variety of purposes, such as giving information, socialising, and so on.  Communicating to influence in business and commerce requires special skills if we are to succeed.  In this article I outline some of the factors that are important when considering how to win friends and influence people.  What separates influence from manipulation is the degree to which it is in the interest of both the sender and the receiver.  A one-sided approach is manipulation whereas a two-sided approach is influence.  Most success in long term business relationships arises from influence rather than manipulation. 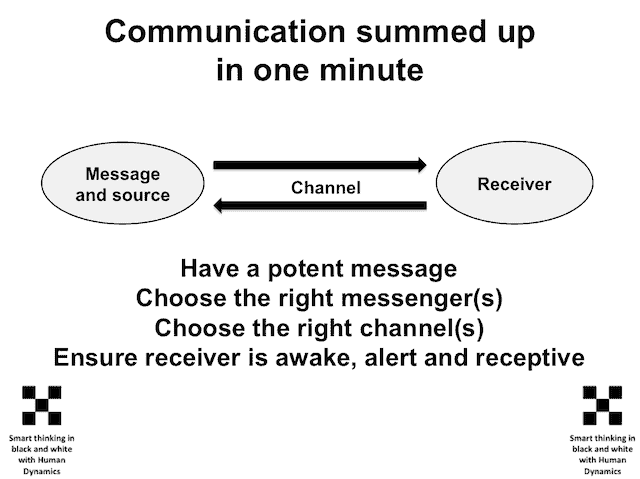 Influential communications can be reduced to four elements:

The Message
Successful communicators use very clear, potent messages to engage and coalesce people around a goal or a project.  Fuzzy messages drive fuzzy actions and fuzzy outcomes.  In short, fail to plan, plan to fail.

Research on communications also has wide implications for those of us who aim to influence with integrity.  Consider carefully these insights:

1. Firstly, let us consider the issue of one-sided versus two-sided messages.  One-sided messages work best when the receivers already agree with the argument, or when they are unlikely to hear counter-arguments.  This may explain why people read newspapers that already accord with their views.

Two-sided messages tend to be more effective when the receivers initially disagree with the argument, where they are well educated, or when they are likely to hear counter-arguments from others.

The ramifications of this innocent-sounding sound bite are massive in terms of thinking about your choice of persuasive communications.

2. When communicating to persuade, it is generally better to draw a conclusion in the message rather than letting others attempt to infer it themselves.  By not drawing a conclusion we invite the possibility that a different one may be drawn.  Or, that no conclusion will be drawn from the passive supply of information.

3. Repetition of a message can increase persuasiveness if used cleverly.  However, over-repetition can wear out a message as well

4. Rather than presenting features, it is better to present benefits, as some people do not translate features into benefits.  A good way of forcing yourself to do this is to ask yourself the question “What does this mean for the person I’m talking with?”

The Messenger
Successful communicators use a messenger or messengers that will be heard.  I’ve tried many experiments where I’ve taken the visuals and audio away from the person delivering the message and found considerable differences in the receptivity of messages.  This is especially so when the messenger is controversial in some way.

It is particularly important to balance your innate passion for your subject with the need to persuade others of its value.  This especially so when people believe that the messenger has something to gain from the outcome.  If you find it impossible to be dispassionate and balanced about your obsession, find someone who can represent your interests in an appropriate way to your subjects.

In general, a messenger is perceived to be more influential when the receiver perceives them to be high rather than low in credibility.

Honesty and trustworthiness are also vitally important to be an effective communicator.  Therefore, the messenger’s influence is weakened when the audience perceives it has something to gain from the communication.  This is another reason to argue on both sides of an issue when people think you are biased.

People are more easily persuaded by people they perceive to be similar to themselves.  This is why it is important to find something in common with your subjects to give you some basis for conversation.

All of this information on communications and influence can be used with congruence and flair as well as an instrument of manipulation.  Successful leaders and change agents know the difference and influence with integrity.

The Channel
Successful communicators choose the best channel(s) or media for the job at hand, not just the most convenient one(s).  When we communicate, we often have a range of goals in mind, from informing to persuading, confronting, facilitating etc.  Impersonal channels can be counter-productive when giving “hard to hear” messages and this explains why people often fall out on social media channels when trying to deliver complex and emotional messages if they are any more difficult than “See you at the restaurant at 6 pm.” The relative poverty of social media as a channel for communicating nuanced messages is counterbalanced by people’s shortage of time to do anything more effective. We are now in the age where deaths are announced on Facebook rather than in person, sometimes for reasons of efficiency but also with some downsides in terms of humanity.

The multiplicity of communication channels has also increased enormously in the last 20 years from text to instant messaging across multiple platforms, video conferencing, and so on, yet our fundamental skills of communicating have not changed.

The Receiver
Successful influencers ensure that those they are communicating with i.e. the receiver(s) are awake, alert and receptive.  Sometimes this is the most important work you can do, to prepare people to hear what you have to say.  Timing can be a crucial determinant of success.  Hard to hear ideas may need some “warm-up” to get the receiver in the mood to receive.  Sometimes a skilled communicator will use several staged attempts to build up interest and desire to hear what is to be said.

Timing and location are also crucial if you are to reach your intended receiver and have the desired outcome.

If you are wishing to communicate to influence and know your receivers, it is also worth considering some general personality traits that can help or hinder your cause.

Deep Purple in Rock: Improvisation And Discipline In Business