Change Teams: What is a Team? And How to Build One

What is a team?

Team may be the most overused word in the business lexicon. It is used as a positive description for any business unit, the “operations team” or sometimes the company as a whole. Speaking of the “GM team,” when General Motors was a workforce of 850,000 may have built some pride, but it didn’t contribute any operational clarity or performance.

Using team as an adjective as in “she’s a team- player” or “he is NOT a team-player” says more about who “toes the line,” respects authority, and who mouths off (i.e., speaks truth to power).

Team behavior, teamwork, often refers to a spirit of cooperation that many of us felt when playing sports or singing in chorus or acting in school plays. These are pleasant memories for us and so when we use the word in business, it is a way to share credit for a good result. No one ever says “great teamwork” when you fail. Teamwork, a warm feeling of collaboration, is not the same as a team.

Jon R. Katzenbach and Douglas K. Smith were McKinsey consultants in 1993 when they wrote The Wisdom of Teams; Creating the high-performance organization. The book largely ignored decades of social science research in small group dynamics and studied teams in business, and in the military.

(Full disclosure: from 1999-2003 I worked for Katzenbach Partners, Jon Katzenbach’s firm after he left McKinsey, so one might say I am fully indoctrinated in these definitions of teams.)

Katzenbach and Smith defined a team as a performance unit that usually had:

Katzenbach and Smith came back together in 2001 to publish The Discipline of Teams: A Mindbook-Workbook for Developing Small Group Performance. This book includes a reiteration of the team definitions together with some helpful warnings about pseudo teams and compromise units. The book also includes research on virtual teams and team and single leader work groups.

Perhaps the most important point to take away from the Katzenbach -Smith team framework is that the team is a performance unit. So is the single leader work group.

However because in change efforts outcomes and ideal processes may be uncertain the real team, as Katzenbach and Smith described it, has greater applicability. Teams take time to build.

How to build a team?

Group dynamics research shows that as people join a group, they ask first questions about the purpose of the group. They then want to know about the other members of the group to determine I they belong. This has become common knowledge to many.

Think about attending the first meeting of a book club, or hobby club or an adult education class. The leader describes the purpose of the group, some basics about the group -how often the meetings will be held, for how long. Then the leader asks everyone to introduce themselves. If the members already know each other the leader might ask each person to describe their skills or a “little known fact” about themselves to deepen the groups knowledge of its members.

The leader is attending to the issues of membership -What is this group? Who are these people? Do I belong here?  Sometimes in business there is a sponsor who outlines purpose or gives a charter to the group.

What follows are issues of leadership and approach -Who is in charge? How will this group be run? What is my role? Sometimes this can be contentious. If there is disagreement about who leads or how, the conflict must be resolved before the group can get on with the work.

As the work progresses and people get accustomed to working together, behavioral norms are set and finally the group gets on with performing the work. Every group takes time to get to working together well. We often hear people say things like “it took us a while, but we finally gelled.”

The field of Group Dynamics was so-named by social psychologist Kurt Lewin in the 1950s. William Schutz, University of Chicago psychologist, expanded the concept to include interpersonal relations issues of inclusion, control, and affection in 1958. Wilfred Bion, University of London and later at the Tavistock Institute, identified group dysfunctions that derailed group development.

In 1965 Bruce Tuckman, a Princeton Ph.D. working at the Naval Research Institute in Bethesda Maryland, published “Developmental Sequence in Small Groups” in which he

named the stages in such a catchy way that the names have stuck since:

Tuckman outlined the stages, but also demonstrated how the tensions in the group changed as the group developed. Leadership issues create the most tension and can destroy groups.

In Discipline of Teams, Katzenbach and Smith showed their research to demonstrate how forming both single leader groups and real teams were similar in the beginning. Every group needs: 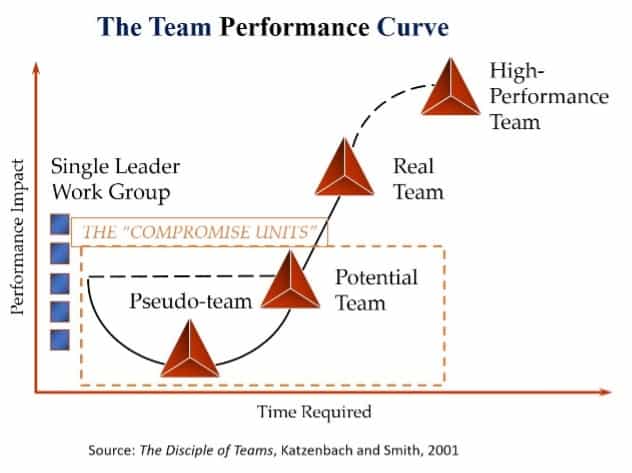 Then the two types of groups diverge. The single leader outlines the working approach and accountabilities. The real team agrees their approach and how and when leadership will emerge. Though Katzenbach and Smith do not refer to Tuckman they do allude to the length of time and tension required to get to high performance in a real team and recommend this performance unit should be used when time allows it and purpose requires it.

I contend that many, but certainly not all, purposes of change teams require the investment in a real team. If you want ongoing high performance, invest the time to build it.

Alan Cullerhttps://wisdomfromunusualplaces.com/
Alan Cay Culler is a writer of stories and songs, his fourth career (aspiring actor, speakers agent, change consultant, storyteller.) He retired after thirty-seven years as a leadership and change consultant. Alan was an executive coach, a leadership team facilitator, trainer, and project manager for innovation and improvement initiatives. Alan’s point of view: "Business is all about people, customers, staff, suppliers, and the community - pay disciplined attention to these people and rewards follow; ignore them and success will not last." Alan is “a seeker of wisdom from unusual places.” He is currently completing three books: Wisdom from Unusual Places, Is Consulting Wisdom an Oxymoron?, and Change Leader? Who me?. Alan earned a BA in Theatre from Centre College, an MBA from the London Business School, and a post-graduate certificate in Organization Development from Columbia University. Alan also builds cigar box guitars and wood sculptures, hikes, travels with his wife Billie, and gets as much grandchildren playtime as he can.