As regular readers of my ravings (and assorted other masochists) know, I’ve written on Cancel Culture before:

Those writings have elicited reactions on a curve that can be accurately rendered like this:

It’s fair to assume, then, that folks will determine — according to their ideological dispositions, their individual definitions, or their perceptions of or grips on reality — that the following items have or have not been canceled, according to the content appearing under this headline: “Books meet ‘cancel culture’”.

The upshot of all that is this: If Someone A doesn’t like what Someone B might want to express, Someone A has the ability to make sure Someone B is muzzled like a dangerous dog. As for the rest of us, tough shit. We can’t be privy to what Someone B would otherwise have chosen to express because (1) Someone A believes we have some seriously errant misconceptions about what’s good for us or (2) Someone A has decided for us that we don’t have the intellectual capacity to know what’s good for us.

Cancel Culture by Any Other Name

terrorism (noun): the use of violence, threats, and/or censorship to intimidate or coerce a population in furtherance of political, social, or ideological objectives

The other benefit of calling it terrorism, of course, is that we already have a system for identifying the seriousness of the threat, courtesy of the fine folks at our very own Department of Homeland Security. 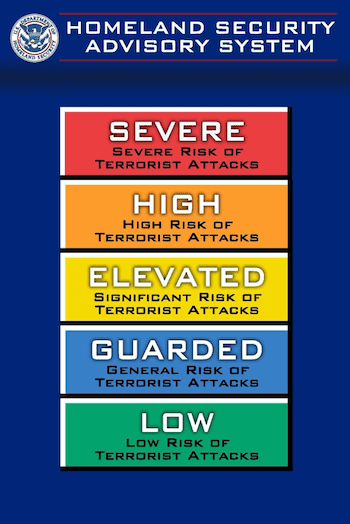 Putting that system to work for Cancel Culture threats is easy. Just codify threats to free speech according to the following criteria:

What could be easier?

If we follow the logic here (or the alarming lack thereof), one of two things will happen:

It’s a great time to be alive, kids.