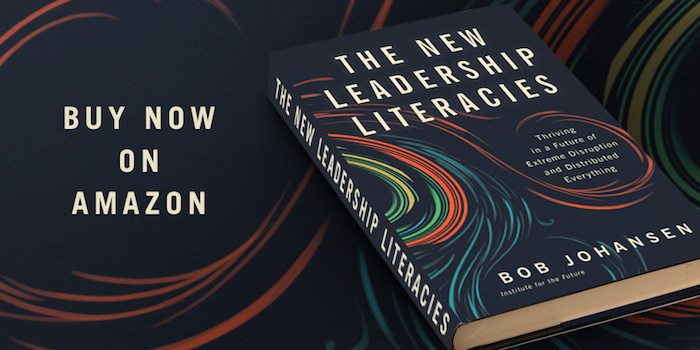 Released on September 5, 2017, Bob Johansen has written a book titled The New Leadership Literacies, that is a remarkable resource for today’s organizations intending to still be thriving decades into the future. Here, in this guest post, is an excerpt from that strategically timed book.

I use the term “hacking” in a positive way, but I’m from Silicon Valley. In Silicon Valley, hacking is creating, growing, making, or re-making—unless it happens to be illegal. We have hackathons of many kinds on a daily basis here. In other parts of the world, any activity described as “hacking” may be perceived as illegal or at least legally suspect.

To me, hacking means to start from something as it is, but make it better in a way that is not illegal. My IFTF colleague Daria Lamb thinks of hacking as chipping away at borders and barriers to the value that are trapped within. I like that.

In the future, we will all have tremendous ability to hack our own bodies, to zoom in and zoom out with high-resolution views that will be so much more powerful than what all but a few people have today. High-resolution body hacking will allow leaders to make and remake their own bodies, to enhance personal energy levels and performance. We will see in much higher resolution—with staggering implications for understanding what contributes to our own health, energy, and well-being.

Ten years from now, how might we hack our physical, mental, and spiritual health in positive ways?

At Institute for the Future, we first used the term “body hacking” in a custom forecast for an east coast company about 15 years ago. Our goal was to be provocative, without turning people off. In our forecast language, we also want to use terms that are familiar enough to grasp—but not sound like the same old thing. “Body hacking,” we found, made some people cringe and it stopped the conversation for others. On the other hand, for many people, it started great conversations. Leaders will have increasing ability to hack their own bodies to help them be more prepared for the leadership challenges they will face.

If you want to be a leader in the VUCA World of the future, you will need to be really healthy. High-resolution body hacking will mean making or remaking your body as needs and opportunities arise. There will always different approaches to health and well-being, but if you’re going to thrive in a disruptive world you’re going to have to make good choices and be extremely healthy.

In Chapters 7 and 8 on being there without being there, I talk about the risks of the uncanny valley, where leaders will be able to develop very close relationships with workers over large distances— but they run the risk of being perceived as too close. Imagine a world with cheap sensors everywhere, many of which are connected and some of which are in our bodies. It is one thing for a leader to body hack his own body to improve his own performance, but what if a leader gets caught in the uncanny valley? Body hacking will make some people cringe if their leader is doing it, but it might be much more repulsive if leaders try to hack the bodies of their own workers.

Is there a way that body hacking can be done in humane and productive ways? We don’t know yet, but I suspect that there are—if we can avoid the uncanny valley.

Bob Johansen is a distinguished fellow with the Institute for the Future in Silicon Valley. For more than 30 years, Bob has helped organizations around the world prepare for and shape the future, including corporations such as P&G, Walmart, McKinsey, United Rentals, and Syngenta, as well as major universities and nonprofits.

The author or co-author of ten books, Bob is a frequent keynote speaker. His best-selling book Get There Early: Sensing the Future to Compete in the Present was selected as one of the top business books of 2007. His latest book is The New Leadership Literacies: Thriving in a Future of Extreme Disruption and Distributed Everything discusses five new leadership literacies—combinations of disciplines, practices, and worldviews—that will be needed to thrive in a VUCA world of increasing volatility, uncertainty, complexity, and ambiguity.  [/message]