The context: The trees and the plants are perhaps the longest and truest friends of our blue planet- Earth. This article seeks to upend the utter human apathy towards these selfless emblems of nature and disruptors for life that fix CO2 to O2.  Occupying a mere 30% of Earth’s land surface (as of 2020) the forests are the most rapidly decimated lot. Although the forests are blipping life onto the Earth, the blips (indigenous tribes, flora, and fauna) have been silenced, hunted, persecuted and charred with incessant urban human exploitation.

Disclaimer- Although the points highlighted and discussed here-in are in consonance with Physics and the laws governing nature, the tone of this article is primarily humanistic and environmental. Also, the author does not attempt to negate the possibility of extra-terrestrial intelligent life that could be present elsewhere in the universe through this article/poem.

Light travels in straight lines or waves and has been doing so for eons. And, it shall continue to do so across trillions of miles forever. (1 light year = 6 trillion (6000000000000) miles). Light gravitates towards infinity in our multidimensional universe (string theory) and at times is held captive by the event horizons of the black holes. And yet, light traverses through the vast expanse of the universe, the canvas of a blank and dark eternity, unaccompanied by the traces of the jostling, nestling life, but for our planet Earth.

I have always wondered, has light ever during the course of its celestial run had the serendipity to touch the verdant, quivering tree leaves elsewhere? Much like they do here on the planet Earth. Perhaps, it does so on some distant shores of the universe or maybe in some other galaxy …

According to Kepler mission data, there is a stark possibility of around 40 billion Earth-sized planets orbiting in the habitable zones of Sun-like stars and red dwarfs in our milky-way! Yet, it is bare data. And, data isn’t information, as information is discernable while data isn’t.

The all American crew of the famous Apollo 13 went as far as 248,655 miles from Earth on April 14th, 1970. The landmark record owes its existence to an explosion that caused the oxygen tank in the service module of the spacecraft to fail.

Earth shaping or terraforming is the process of creating Earth-like conditions on other planets so that they become human habitable. Yet, the concept (coined by Jack Williamson, (1942) in a Sci-fi short story) has far too many limitations to become a reality.

Phosphine (a by-product of anaerobic biology) had been recently detected in the atmosphere of Venus (Sep 2020) – this discovery had galvanized the space exploration community. It seemed to vindicate Carl Sagan’s assertion made in 1967 when he wrote in the science journal Nature that we might one day find microbial life above our sister planet (Venus). Yet, since Sep 2020, three independent studies have failed to find evidence of Phosphine in the Venusian atmosphere.

Even if Phosphine were present, the very process of replicating Earth-like conditions on alien or sister planets would take a few million years in the least or more.

The Earth IS the only ‘home’ we-the living humans have for the next few million years in the universe that we know!

The selfless emblems of life (trees) that now stand decimated

The 3.7 billion year sustained life-hustle by our lonely blue planet (Earth) is now rapidly crumbling. Ironically, the Homo-sapiens, who arguably are the most intelligent of the primates, have inhabited Earth barely for 6 million years. This is a meager 0.16% of life’s presence on Earth! The other most dominant but now extinct primate, the Dinosaurs, thrived a lot longer than Homo-sapiens. As US Geological Survey estimates, they reigned the planet for about 165 million years. Under their reign, our blue planet must have looked a lot greener! Ironically, 65% of the dinosaurs were herbivores.

In 2020, Amazon rainforests continued getting torched by the reigning homo-sapiens.  There were more than 17326 hotspots that torched the Amazon forest.  As of Dec 2020, the fires were up by 28% in comparison to 2019. The Papua rainforests (Indonesia) have 60,000 hectares of land (greater than the size of Chicago) singed to orchestrated fire by a major palm oil-producing giant since 2001. California wildfires burned down 4 million selfless emblems of life – the pines and fir vegetation. As per the US Department of Interior, 90% of them were caused and fanned by unattended campfires, debris-burning, discarded cigarettes, arson, etc. The Australian Bush Fires are similarly traced. According to Australia’s National Centre for Research in Bushfire and Arson, 13% of bushfires every year are deliberate and 37% are suspicious.  (Ref. Happiness & Utility)

The center for Climate, Health, And the Global Environment, Harvard (C-CHANGE) states – ‘Deforestation is the largest source of natural habitat loss world-wide forcing the animals to migrate and potentially contact other animals or people to share germs’ – is this unnatural ‘contact’ a significant contributing cause behind the outbreak for the recent epidemics and pandemics such as SARS, EBOLA, and COVID?

The Harvardians’ recent research (at C-CHANGE) reveals that a small increase in long term exposure to PM2.5 leads to a large increase of 15% in COVID-19 death rate (Rachel Nethery, Xiao Wu, Francesca Dominic, et al). More information regarding this research can be traced at greencarcongress.com.

The table below states the average particulate matter present in the air in the aftermath of the planetary forest fires in recent times:

(PM2.5 refers to atmospheric particulate matter (PM) that have a diameter of less than 2.5 micrometers)

Every autumn, the farmers in India are forced to burn an estimated 35 million tons of crop residue from their paddy fields as a low-cost straw disposal practice creating ecological disaster and respiratory gas chambers for all. There aren’t any greener alternatives available to them for rapid straw disposal to date! China’s total carbon emissions are twice that of the United States and nearly one-third of the entire global emissions. Although the country’s affirmation of going carbon neutral by 2060 is commendable, China burns more coal than the rest of the world combined. And yet, China has shown remarkable improvement in the breathable air-quality if one compares the table below with India.

The trends above continue to be disturbing and are primarily caused by the reformative inertia rampant in the administrative and governmental tiers of the two Asian countries.

The table below highlights the real-time air quality index in the capital regions of the two Asian giants that together have as much as 36% of the 7.8 billion world population:

SARS, EBOLA, COVID 19 are a mere onset to the impending doom. If the above PM2.5 numbers are anything to go by, the Earth is well-trapped into man-created smoky mega gas-chambers that are fired by global deforestation, greenhouse emissions and the ensuing climate change.

While dinosaurs required an apocalyptical meteor strike from above, homo-sapiens don’t need one. We are doing a great job in that direction already. We are creating airpocalypase!

Trillion Tree Campaign was launched in 2007 as a response to combat climate change by the United Nation Environment Program (UNEP). In 2020, the World Economic Forum at Davos announced the campaign platform for government, businesses, and civil societies to provide support to the campaign. Inspired by the Nobel Peace Prize laureate Wangari Mathaai, the campaign has been able to plant 13.94 billion trees so far since 2006.

Genuine doubts have been raised about the effectiveness of the trillion tree campaign. The major ones are: Planting plantations of a single species (not forest) could ruin the ecological balance. Moreover, planting trees where they don’t belong is detrimental to the habitat. The campaign could divert attention from deforestation and fossil fuel pollution.

Why can’t we do both? Plant a trillion trees and protect the existing forests with its peoples

The doubts highlighted above are genuine. But, we could adopt the middle path here.

Plant the adapted species and not the alien ones: The indigenous plant & tree species are well adapted to the soil conditions and the fragile ecology of a given region. Grow giant Kapoks, Brazilian Nut Tree, and the creeping aroids back in the massively fire-scorched and axed land-masses of the Amazons. Grow Durian, Sandalwood, Teak, and Ironwood in the charred fields of the Papua rainforests. Grow Sugar/Ponderosa Pines, Canyon Live Oaks, Cypresses, and Cedars in the spurned forests of California. Grow Wattles, Proteaceae, and Haemodoraceae in the fire-ashed bushes of Australia.

We must absolutely protect the social and land rights of the indigenous tribal peoples across the globe: Historically, the indigenous tribes have protected their native forests as their divine heritage and they, most reverently, continue to do so to date (barring a few odd exceptions)

The governments across the globe would certainly do well to institute strict legal compliance frameworks that deter and forbid unscrupulous corporates to instigate forest fires and pin the blame on thunderstorms. Extreme weather conditions are a byproduct of climate change.  (https://news.stanford.edu/2020/03/18/climate-change-means-extreme-weather-predicted/)

With the US signing back on to the Paris Agreement in January 2021, all UN members would be signed up to the accord. The goal of ‘keeping the global temperatures below 2  C’ might get accelerated if every nation on the planet agrees to incorporate and contribute to the trillion tree campaign alongside curbing their carbon emissions.

As we mourn, fight, and relapse into the surging COVID pandemic, we cannot undermine the role of deforestation in its origin and spread. Pollution is directly proportional to deforestation. Vertical gardens, vegetarianism, and solar-power-driven technologies could be some of the ways that would help keep a healthier and cleaner environment for the future.

Thank you, Eyra: A sincere ‘thanks’ goes out to Eyra Moon, the singer & composer with great originality! On being asked, she agreed to contribute to the documentary video with two of her most beautiful songs (Where are you now/Ocean full of stars) that add up to the intense sentiment of the documentary film. 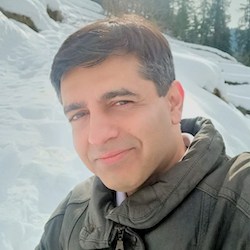