It was one of those nights. Sat outside a prison in my car as the rain poured down the windows. I wondered, ‘why do I do this?’

At home in our cottage, my wife and three daughters would be snuggled up in front of the open fire, watching television. And here was I, miles away in a freezing parking lot, waiting to ring the bell and be welcomed into the stark interior of yet another jail.

I’d been there before, and they were not very friendly. Even the Chaplain, under whose auspices I’d been invited, was the theatrical type who’d previously turned his nose up at my presence, because it wasn’t about him.

By contrast, I was more your Mike Tyson. Knew I had the goods, no need for posturing, just give me the platform, and let’s rumble.

I ran the engine for the fifth time, trying to keep warm, bereft of inspiration, and wondered what to say. Inspiration was about to dawn, but meanwhile, I sat there feeling flat.

Suddenly I had an idea. There was a little Gideon Bible in the glove box. I’d pull it out, open it at random and use whatever I saw first. It seemed exciting, like doing the Lotto, maybe I’d strike gold? But no. Clicking on the interior light, my heart sank as the story of the woman with the issue of blood met my eyes. I knew it well.

‘Shit,’ I thought, glancing out at the prison walls, ‘these are men, not women with sanitary problems,’ and with a sigh, dropped the book on the passenger seat. Time was running short, and I needed an idea.

Suddenly, before I could open the door and make a dash for the gate, an inner voice spoke.

“You may mock, but you know perfectly well what it’s like to bleed for twelve years, just like that woman.”

Immediately, memories of my young life came flooding back, year after year of increasing trouble, prison after prison, heartache upon heartache, until there had been almost nothing left of me.

……“Dragging your bleeding soul around, with nobody to make you well,” it continued.

Once again, I glanced at the uncompromising walls, and the voice continued, “Every one of those men knows exactly what it’s like to bleed, year after year, their souls broken, with nobody to bind them back together.”

They were the bullets in the gun that I needed. Boy, was I suddenly ready! Not loud, in fact humble, as if about to carry a potion that must not be spilled.

Everything went as expected; unfriendly staff, disinterested Chaplain, banging doors, noisy keys, cold seats, and the prisoners themselves were more boisterous than usual. I simply shared with them exactly what I’ve just shared with you, at which my audience grew increasingly quiet. At the very moment when one could have heard a pin drop, I invited whoever would like to come to the front, to please do so.

This was often a magical moment.

All I’d do was offer my hand to one at a time, and whoever took mine would be impacted by a power that I knew not of. Some fell to the floor, others buckled and cried, and occasionally somebody fell unconscious.

All the while, those who remained in their seats stared in animated curiosity.

Over the years, I never did understand what was happening to those who were hit by the power. It was personal, different for everyone, and sprung from their many different needs.

Some considered me powerful or clever, but I was just ‘the pizza delivery man.’ I got it handed to me, and simply passed it on to somebody else. Simples. 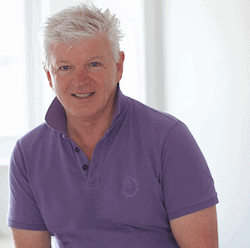 James Carré-Ricehttps://jamescarrerice.com/
Born in Liverpool, England, best-selling author and kick-ass public speaker, James (aka Jimmy Rice) is a hope giver with a big heart and always makes a difference. From teenage runaway, street rat, jailbird, he ‘saw the light’ in prison and completely changed.  Since then, his life has been dedicated to sharing the keys to freedom with others. He’s raised three graduate daughters, lived and worked on both sides of the Atlantic and published three books, and is widely traveled. He operated several government-funded crime-busting projects in the UK and established Youth Courts in Broome County of New York. A talented communicator, James has a gift for imparting the complex issues of awakening/awareness in an earthy and easy-to-understand way. As a speaker, he addresses a wide variety of audiences from Doctors to Death Row, Gangsters to Business Forums, and Spiritual Retreats to Bookfairs. Public speaking came as a surprise to James, and more especially the impact he had on people.  In fact, he best be described as an ‘impact speaker’. Currently, based on the island of Jersey off the French coast, his new website provides the opportunity for people to engage with him either in person, online or book him for a public event.