A Barge pole is a long pole that is used to propel barges in waterways and remove obstacles. In the deep waterways of Kerala, Sunderban Mangroves, Amazon, Yangtze, Nile, in other rivers and backwaters, the native boatmen use Barge poles instead of oars.

The word is popular for ‘won’t touch with a 10 feet Barge pole’.  It means that we don’t have anything to do with that thing, matter, or person – either because we don’t approve of it or wish to do anything about it.

I belong to God’s own country of India, called Kerala, a small state on the South Western Coast of India. It is a land of beauty – of nature and its womenfolk.  The language is sweet as the coconut water that you can taste.

I was browsing through the photographs of our trip to the backwaters of Kerala, in a place called ‘Alapuzha’.  It is rural Venice. The boats are houseboats, and the water is deeper. One could read or write a book for a month, or even more, or go for a 2-night, 3-day trip. It is the most serene of the tropics, and someday, if BizCatalyst360 allows, I can share pictures of these beautiful backwaters and houseboats.

I was pulled into the vortex of the trip.  This trip was with my in-law’s family, and I was one of the two sons-in-law on the trip. One can say that this is a trip that contained all the elements of a family jaunt, fun, frolic, gaffes, and giggles. I was just learning to video shoot then, so there are reams of raw footage of that trip.

After the first night of our trip, when our houseboat had moored on the shallow waterways, much away from the housing embankments. The crew of the houseboat comprises excellent oarsmen and cooks, and they could make anything you want – as long as they are vegetables and fish.  We are vegetarians, but still, they churned out excellent delicacies in the kitchen. 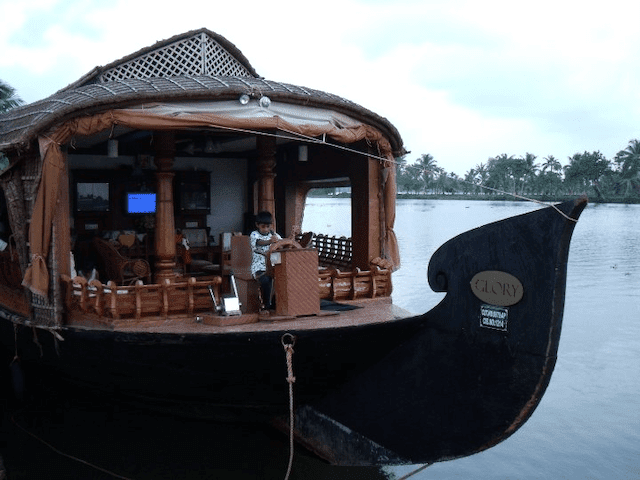 As we woke up on the second day morning, we found ourselves right under the midmorning sun. The cool, wavy water was inviting, and some of us decided to dive. The kids got into orange-colored lifebuoys, which were in turn tied to the moored boat, and they started flashing water.  One buoy was left free, and the adults and those who thought they knew how to swim, took turns.

In that round-robin, I ended up without the free lifebuoy, as I knew to swim in the safe swimming pools of our city. My son was on the free buoy. It was all fun till my son started screaming as the buoy was swept away in the swirling waters that ran on the side of the houseboat.

The waters were much stronger than I expected, but I succeeded in reining the plastic rope that was around the buoy. Only a few saw this melee, as a major group in the family had gone to the embankment to enjoy the shades and were clicking pictures.

The buoy was pulled back by my brother-in-law, but while I pushed the buoy towards him – the buoy still holding my son – I slipped into the same swirls. I thought I could swim, but the undercurrents were stronger and I was being pushed down and forward. For a moment, things went blank and I think I saw the proverbial ‘white light’. I panicked and frantically searched for a hold, but I could not find any.

I blurted out a few words that I cannot remember now. I think my brother-in-law saw this, as I was on the other side of the boat, so I was not sure about what happened next. But one of the oarsmen thrust a Barge pole into the water. I could hear his voice, while I was seeing white and drinking water.

It took me a few eternal moments to find something hard that poked at me. I gripped it and then slowly they steered the Barge pole towards the bank. I held onto the Barge pole for dear life and paddled my legs to the shallower and safer waters near the bank.

I saw the Barge pole only then.

As I spit water that I had swallowed, somebody put a towel around me. The Barge pole was thrown to the side of the houseboat. It fell with a thud and rested after some rolls. It did not say anything except to just lie there. Its role was now over. Only when the houseboat is unmoored would it be fetched again.

But I was thinking about the ‘white light’ at that time, as I sputtered and coughed; and the dark object that poked me from heaven (so I thought, giving myself the benefit of doubt).

Only my brother-in-law was around. He was a scrawny 20-year-old man then. He had a dull view of life, and he was lost in his thoughts. There is something about being a 20-year-old – just out of teens, yet the traces remain; it is the first odd year of adulthood, and still a student.

The crewperson who had stuck out that Barge pole for me asked me if I was ok.

‘I am fine.’ I was still sputtering and coughing.

‘You might be wondering why we did not jump but thrust a Barge pole.’ He ventured slowly into the obvious question on my mind.

The wise words of the crew:

I nodded my head, acknowledging his point.

‘You were being swept away, almost half a boat length. If we had jumped in, we could have missed you, and there was a chance that you would have slipped out of our reach. Secondly, we know the strength of the undercurrent – that is why we warned you to stay close to the banks.’  He paused, letting the points sink in.

I looked at him through my teary eyes.

‘We are trained in these situations. People take our advice for granted. So, we always go about our work, while keeping an eye open for such mishaps.’ He folded his dhoti to his knees in style.

‘A Barge pole thrust in the waters is all that is needed.  Once you held to it, it is easier to move it towards the bank. That way, we save you, and we also don’t get hurt.’ He talked as if it was one more event in his life.

I merely nodded my head. I was still recovering, but it slowly dawned on me that we had ignored their words of caution.

The wisdom of the Barge pole:

I close my eyes as I turn to that photograph, where I push my son away.  I see the murky brown water turn into white. Is it the proverbial white light?  Is it my end?  I try to scream, but I cannot. I almost relive the trauma.

Then the dark object pokes at me. The Barge pole. The grip of my life.  I am happy and grateful. No word is spoken till I reach the embankment.

I sputtered and coughed again. The trauma was still in my mind. Once things settled, my mind replayed the words of the barge-man again.

Did I need somebody to dive into the swirling undercurrents?  I don’t know. But the Barge pole did the trick. All I needed was that little grip when I was being swept away.

In our lives, we reach that points where the undercurrents sweep us away, and we lose our footings and bearings. All we need is a Barge pole, and not a diver to jump into the swirling waters.

‘Touching with a Barge pole’ is lending that helping hand or just a finger, but it does a lot in saving and steering the troubled person back on rails. The little things we do to help others – a hug, a whisper, a touch, a word or just listening in silence. Sometimes, it could be a little money or a word that you put in.

So, next time, see if you can touch lives with a Barge pole.

Ashok Subramanian
Ashok Subramanian is a Poet and Fiction Author based in Chennai, India. Ashok has been writing blogs and content since 2011. From technology and management articles, and to website content, Ashok has written articles on businesses, finance, funding, capital markets, management, strategy, and sustainability over the years. His poems and articles, which were published in blogs got a publishing turn when he had time in hand to put together his poetry and short story collections. He publishes short stories and poetry reviews regularly in his medium.com blog. His published works so far: a) Maritime Heritage of India - Contributing Writer - b) Poetarrati Volume 1 &2: Self-published on Amazon in Kindle and Paperback; Ranked #8 in Amazon Hot Releases in May 2020. c) A City Full of Stories: A Short fiction Collection based on people and events of Mumbai: Self-published in Amazon in Kindle and Paperback. d) Poetarrati Ponder 2020 - A collection of Poem Reviews He is currently working with his creative advisor and publisher on his next poetry collection. His second short story collection about Kolkata, India, and his first novel are in the manuscript stage. He is a graduate in Engineering from Madurai Kamaraj University, India, and a post-graduate in Management from IIM Calcutta, India. He currently runs Strategic Advisory and Investment Banking companies headquartered in Bengaluru. He lives with his wife Gayathri and son Anirudh in Chennai, India.