In the centre, where King Alfred the Great’s statue projects both strength and unity, there are immaculate public gardens resplendent with beautiful colorful flower beds, a stream, and‎  weeping willows; their reflections gracing rippling water. 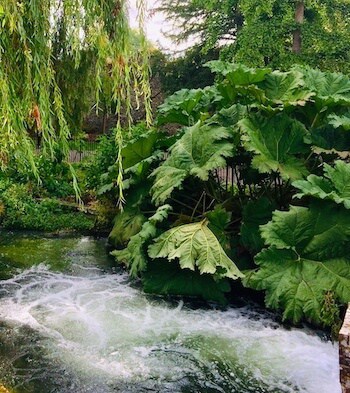 There are many ancient ruins; King William the Conqueror’s castle (some remains are to be found) and his grandson, Bishop Henry de Blois, who ‘commissioned’ the now 900-year olf Winchester Bible, lived in a fortified palace. 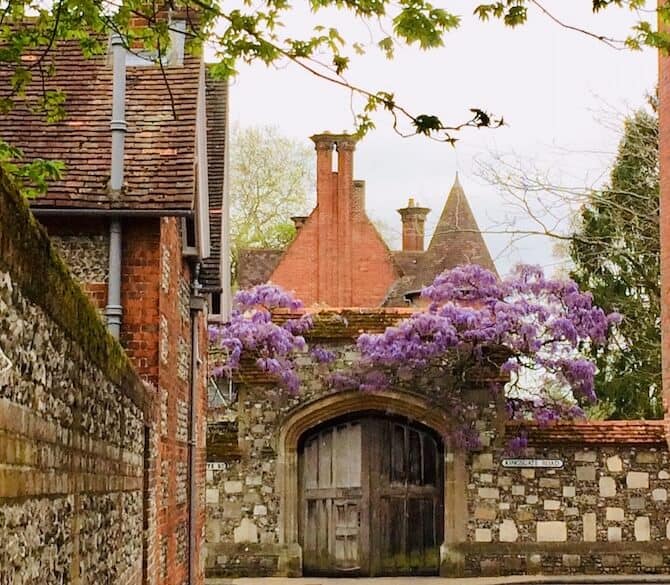 Many formally beautiful castles, grand palaces; some dating back to William the Conqueror, where gifts to Norman noblemen were manifested in large estates ‎in recognition of their loyalty and support to William of Normandy.  A number of individuals still have Norman-French surnames.

Winchester Cathedral was ‘commissioned by William the Conqueror and took 25 years to build. Some of the round pillars high up on the triforium are Roman but lifted up there as they were the right size and made of one piece. The stonework for the Cathedral was transported from the Isle of White. Similarities with Stone Henge? Transporting stones?

Winchester Castle was built in 1067; a year after the Battle of Hastings where William the Conqueror won and became king. In those days, Winchester was the seat ‎of kings, later to be moved to London. All that remains is the Great Hall and ruins of the castle, with passageways leading to a dry moat that surrounded the castle.

The Westgate is an example of the longevity of such structures and the view from the top is awesome, overlooking the city itself.   Rumour has it that when it was destroyed, many residents of Winchester gathered the square stones that had fallen to the ground, incorporating them in house walls and other buildings. These can be still seen dotted around many ancient buildings mixed with old brick and half-timbered structures.

During the Danish era, between circa 800 AD and 900 ‎AD, the Danish capital was York. Current place-name derivations include Tenby, Grimsby, and other towns ending in ‘by’. ‘BY’ is Danish for ‘town’ and is pronounced ‘boo’: ‘Tenboo’  and Grimsboo’ in Danish.

The Roman era ended around AD400‎, but they left quite a legacy. For example, Roman roads; straight highways for miles, typically leading to areas from London. Although now surfaced with tarmac, they are as clear and straight as over 1600 years ago. The Romans certainly had incredible building skills, including creating large round pillars. There are fine examples to be seen in the Inner Close of the Cathedral. 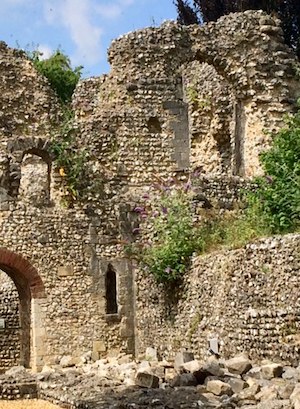 Just a few minutes walk from King Alfred’s statue and Winchester College (and the house where Jane Austin passed away) are the dramatic ruins of  Wolvesey Castle. Once luxurious palace for Winchester’s bishops was also a castle; a giant of a structure. Erected in AD970, Wolvesey Castle ‎must have been the most amazing palace/castle located on Winchester’s doorstep.

From the castle and over the city’s fortified walls, St. Giles’ Hill is clearly visible, a lush green canopy of trees in contrast to the dark grey walls and structures of Wolvesey Castle. Walking around the ruins there is an almost tactile feel about them. So high and expansive, walking through areas where you are in close proximity to walls on either side, it certainly does present an awesome presence.

There is indeed a higher level of consciousness that can embrace those who have a natural sensitivity or awareness of times past. The ability to ‘log-in’; typically without having to think of tuning in, but a natural phenomenon.

Perhaps ‘ daydreaming’ manifesting; something we wanted but too remote to gather in our hearts, but walking around contrasting ancient structures and at the same time absorbing the most amazing countryside does elevate you to another level. Daydreaming; wondering what life would have been like in those days.‎ Then during a quiet moment’s reflection, imagination and a sixth sense absorb you in a fantasy of historic reality.

I can’t help but love everything about friendly and historic Winchester. From many cafés and brasseries providing a tangible Continental atmosphere to the glorious countryside, literally minutes from the center.

Thank you for reading this account which literally came from my heart.