Do newborns come with a built-in sense of fairness or do we develop it over time? Are humans fundamentally selfish agents who learn that fairness is a construct designed to help us override our selfish instincts? Or is our default an unwillingness to accept injustice?

To answer these questions, we must understand the two opposing forces at work in the biology of the human brain — our reward response and our threat response. We’re neurologically wired to minimize danger and maximize reward. It’s true not just for survival, but also for our social behavior and experiences.

Thanks to neural imaging technology, we know that the brain finds self-serving behavior emotionally unpleasant and genuine fairness rewarding. What’s more, these emotional firings occur in brain structures that are fast and automatic, so it appears that the emotional brain defaults to overrule the more deliberate, rational mind.

Back in 1982 a group of researchers developed the Ultimatum Game – what has become the most popular economics negotiation experiments and a prime example of irrational impulsive behavior triggered by perceived unfairness.  It’s a simple, take-it-or-leave-it bargaining experiment: two strangers are given a sum of money (say $10) to split. One player is randomly designated as the giver tasked with deciding how the sum should be divided (e.g. $7 for the giver, $3 for the receiver). The receiver then decides whether to accept or reject the offer.  If the receiver accepts, the money is split accordingly. But if the receiver rejects the offer, neither player gets anything.  The game is only played once so there is no scheming or payback.

Theoretically, the givers would offer an even split so both players win the same and the receivers would accept any offer since anything is better than nothing. But that isn’t what typically happens. On average, proposers offer about 40% of the pie to the second player – keeping a bigger percentage for themselves. Moreover, offers are rejected about 15-20% of the time.

When offered a fair share of the money, the reward centers of the brain lights up, specifically the ventral striatum, amygdala, orbitofrontal cortex (OFC), and ventromedial prefrontal cortex (VLPFC). These areas are associated with automatic, intuitive reactions, rather than learned responses.

Unfair offers, on the other hand, showed activity in the anterior insula – an area associated with contempt or disgust reactions to bad tastes or smells.  The more activity, the greater the likelihood of rejection.

While there are multiple psychological processes at work here, the receivers’ decision to either accept or reject the offer demonstrates Kahneman’s “systems thinking” theory. Kahneman maintains that System 1 thinking is fast and automatic, whereas System 2 is slower and more deliberate. System 1 would quickly “accept” a fair offer of a 50/50 split, because it is equally beneficial for both players. Under such circumstances, the neuroimaging research has revealed activation in the reward and pleasure areas.

However, System 1 doesn’t like to deal with unfair offers. The conflict between an aversion to unfairness and self-interest requires a more deliberate, reflective secondary system – or System 2 thinking which activates frontal brain regions – specifically the anterior cingulate cortex, a region that applies cognitive control to resolve conflicts. But because System 1 is impulsive and emotional, it often rejects the “unfair offer” before System 2 can kick in to determine that something is better than nothing. 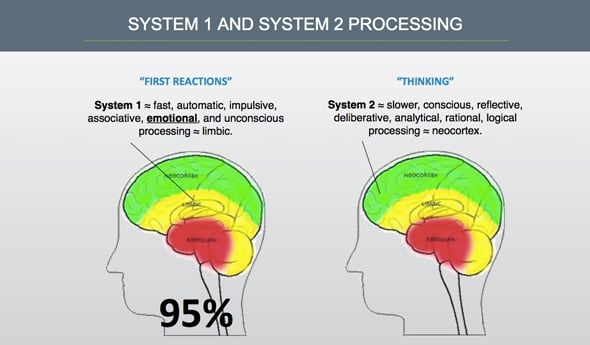 Neural chemistry also impacts our willingness to accept what we perceive to be unfair (as the receiver) as well as our generosity (as the giver).  Molly Crockett and her colleagues at the University of Cambridge, UK gave volunteers a drink that temporarily lowered their levels of serotonin, – also known as the chill pill because it is linked to overall well-being and positive mental state. They then had them play the Ultimatum Game. Those with lower serotonin levels rejected offers more often than players with normal serotonin levels. Crockett’s research showed that higher serotonin levels enables us to more easily switch to System 2 thinking where reason overrides emotion.

We also know that oxytocin levels influence generosity.  In another study conducted by Paul Zak, short video clips of an emotional scene and an unemotional scene were used as stimuli. Participants rated the emotions they experienced and then played the ultimatum game to gauge their generosity. We found that empathy was associated with a 47% increase in oxytocin.  Higher levels of oxytocin were associated with more generous offers by the givers in the game. Those findings provide the first evidence that oxytocin is a physiologic signature for empathy and that empathy mediates generosity.

Outsmart the Systems 1 Trap and Allow Reason Rule Your Decisions

The best way to guard against snap, emotional decisions is to force yourself to take a breath. In the Ultimatum Game, the receiver who decides to accept the offer does so at a much slower pace than the receiver who rejects the offer. Rejections are often made quickly – many times instantaneously. When the game was modified slightly to create a waiting period between the offer and the decision, the receivers were much more likely to accept — even offers they perceived to be unfair. Remember, System 1 thinking is emotional and impulsive while System 2 thinking is reflective and analytic. Force yourself to wait a day or two before buying that new gadget or expensive handbag. If you still want it just as much, at least you know it wasn’t an impulse buy.