–In Memory of Officer Tara O’Sullivan

In this case, as I drove into my volunteer position at the church for the week, another Officer was reported being killed in the line of duty in Sacramento.  Officer and Rookie, Tara O” Sullivan, age 26, killed while assisting in a call for Domestic Violence.  Granted, I wasn’t there, but the first thing that comes to my mind in listening to how it was being reported, “Officer O’Sullivan was killed while standing by helping the woman gather belongs in order to leave the home.  Then, the next thing reported is that shots were fired and Officer O’Sullivan was killed. 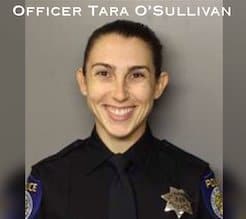 So, I begin to think, okay, she’s still a Rookie in training.  Where was she standing, who had her back, where was her training officer, was this about lack of training?  I don’t know, I wasn’t there, and I am not second-guessing, but I am aware of the pitfalls when it does come to improper training or complacency.  What was the history on the suspect?  Had there been calls there before?  So much runs through my mind as a former police officer who found myself in similar situations, but by the grace of God, I survived.  I have to admit that my former training officer at the end of my probation and training was greatly responsible for my surviving in an era where women were just coming into play in police work.  His name fits him, “Mad Dog”, but what I learned from him, I remember still today. He wasn’t mad, he was just a dam good training officer.

I am not sure what investigation will come of this shooting when all is said an done, but for the family of Officer O’Sullivan and she herself, I will add to the lengthy prayer list of Officers killed in the line of duty so senselessly.  God Bless you Tara, and you will never be forgotten.  May you rest in peace.

Holy is His Name