Align With Your Desire

Many things have been written about the subject of manifestation and it’s been a huge topic of interest for me for quite some time. Mainly because I seem to be very good at manifesting certain things in my life and others not so well. Why is that? I wondered… Because up until recently I had no idea how it worked. I thought it just happened.

Ever since I was a teenager I fell in love with the concept “loft” as a way of living. The industrial design, the wide-open spaces, high ceiling, rough walls, big sliding doors, and large windows make me very happy somehow. Around 2008 I decided to create a file map on my computer named “manifestations” to make sure the Universe knew what I wanted (LOL) and added pictures from the internet that matched my desires; A lover on the beach somewhere sunny, my name on the cinema screen “Soundtrack by Eyra Moon”, visiting a warm waterfall in nature called Saturnia, living in an old church and a loft that I found on a website selling houses in my hometown.

In 2012 my husband and I separated. I searched the internet for affordable rooms and apartments and found a gorgeous building that rented out some spaces for singles. The building looked familiar but did not immediately ring a bell. Until the owner of the house asked me to follow him to his apartment on the top floor to sign the contract. It was the loft I had in my manifestation file since 2008! A wonderful friendship started with him and when he was on a holiday, I stayed in his loft. The one from my files!!

In the Summer of 2015, I had a dream about staying in a monastery in Italy. To tempt the Universe again I added some photos I found on the internet of monasteries. Due to some events in my life, I had the opportunity to go to Italy in 2016 and help to renovate a monastery. The first night the community who took care of the building had a little barbecue where I was invited. I asked what they did on their weekends. One guy told me he was often visiting Saturnia, a warm waterfall of 38 degrees nearby. I almost fell from my chair and asked: “Are you kidding me? Is that close?” It was in fact indeed and a week later I found myself end of October in a bikini under an incredible hot waterfall in the middle of nature! The one from my manifestation folder!

The community who was renovating the monastery didn’t last long and I would find myself without any penny on the streets of Italy the next day. Was I wrong? Could it have been another monastery that I should have manifested? I started Googling and stumbled upon a monastery that (you guessed it) had been in my manifestation folder for many years. It was a boutique hotel only 20minutes from where I was now! Of all places in Italy!

I send the owner an email with my work experience and skills and asked him if he could use a helping hand. Within two hours I received a response. If I could come for coffee the next morning. The day I suppose to leave my stay! Someone dropped me of with two suitcases and my handpan in the middle of a forest. “Are you sure?” he asked worried. I looked around, knowing about wolves and wild boar living here, but felt very confident this time I was in the right place, because of the photo I had in my computer for so long. Five minutes later a “monk” picked me up and brought me to the hotel. The owner heard my story and gave me the opportunity to live and work and I did for several months. That night I found myself in the bathhouse that I knew so well from the folder. See for yourself at www.eremito.com 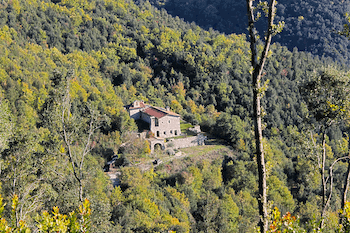 I could go on for hours with examples like these, but the overall question is: How did I do it? As there have been many things I did not manifest, my research has led me to the following:

and here lies the key!

Everything is energy that vibrates on a certain level. When we want something TOO MUCH! We look at the pictures feeling the vibration of lack. We feel sad when the lover is NOT here. We may feel disappointed the money or career did NOT come. And when we keep on asking the Universe to bring it to us we basically say: “Please bring it, because it is NOT HERE”

The monastery, loft, and Saturnia manifested because I knew they are here! No doubt! ZERO! I had seen the photos on the internet. They existed! And then I had let it go. And because I did, the Universe found the space to bring it to me.

Let’s say I asked for 60.000 euro a year. The question please bring it to me, or even “I allow in 60.000 euro” is in a vibration of not having it. The 60.000 euro however is here! But on a different vibration! We cannot receive rock music on Classic FM. The same goes for receiving desires. The thoughts, questions, and beliefs of not having it right now, do NOT match the same vibration of having it. Therefore they CANNOT COME to you! Like you won’t find Bach on a Rock station.

Align with the same vibration and it will come!

Are there 60.000 euros like there was the loft, Saturnia, and the monastery? YES! There are billions even! The key is to tune into the same vibration. For instance, being grateful for the money that you owe right now, as it is a part of the 60.000 euro annually. Or the money you receive for an assignment. Knowing that is a part of the 60.000 euro too. When you want that dress and you cannot afford it right now, do not connect to the not able now, instead, love the design of the dress. The designer that made it so beautiful. The shop that is selling it. All those feelings match the vibration of having it. Then let it go. Go on, live your life and feel gratitude and love for the things and people in your life that you have. Cause they all vibrate on that same level.

When we stay aligned with the same vibration on which the desire is resonating, it will come! With one remark; IF IT IS in alignment with your soul’s path! But in general, it will!

Maybe it’s a different lover than you thought, or a better career offer, a nicer house on a better location, a doctor who teaches you a better lifestyle that not necessarily treats your illness straight away, but leads to a more vibrant body or insights on a spiritual level. Anyway, the Universe brings you someone or something vibrating on a high level. That is for sure!

One thing before I leave this essay, that seemed to have a huge impact in the matter of manifestation; I discovered that for a long time deep down, I was afraid of winning, of success, of having that wonderful lover and soul connection with someone, of receiving lots of money, a nice house, a steaming hot music career because deep down I was afraid I would not be able to handle all that luck and mess it all up. That thought of course was way offline and not aligned with the vibration of having it. So when I discovered that, I decided to teach myself to stay aligned and bring my mind gently and tender back to the alignment of having it. It was a leap into the deep, but slowly I got better at it.

I hope sharing my journey and soul digging was helpful. I am looking forward to your responses and experiences in manifesting. Maybe we can inspire each other!

Song: Leap Into The Deep by Eyra Moon

Eyra Moonhttps://eyramoon.com/music%20
Eyra Moon is an intuitive artist with a tremendous fascination and deeply felt connection to our universe. Her journey in discovering the law of the Universe, the words we use, the believes we embedded as our own that create our reality, reflect back in her work. She invites the listener to go on a journey with her to landscapes of sounds and dream states, carried by her soothing voice, far away from the conditioned world. To go within and feel. To reconnect with what we truly are; a beautiful source being. Under the name “New World Music” Eyra Moon creates often wordless videos and music that invites the listener to go within to see what messages occur for them. She believes the more we connect to our source self, the more we can start creating a world from the freedom, love, abundance, and serenity that we are.