A Visit to Winchester: The Kings and Scribes Exhibition

A visit to Winchester is special. I am always astounded by the city’s historical heritage which is visible in almost every direction one may look; walking through history from Roman, times through to King Alfred the Great and beyond to the Norman era. 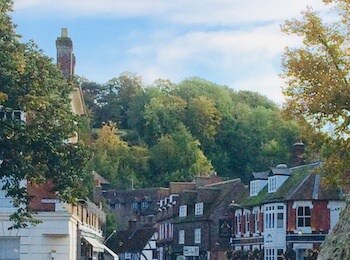 St. Giles’ Hill, a stone’s throw from the center, affords spectacular views of the city;  King Alfred the Great’s statue, a proud statement of his rôle in establishing Winchester in his day as the capital of England. Indeed, the birth of a nation. King Alfred is the only English monarch to be afforded the title ‘Great’.

Strolling along the banks of the River Itchen (poet Keats’ favorite walk)‎ and the Water Meadows, create a scene of significance; a synergy of Mother Nature and ancient structural icons providing a distinct harmony, forever tempting further exploration.  A delightful thought.

Around the immediate center, one is literally surrounded by the City’s historical heritage. 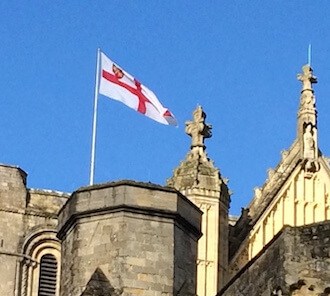 The ruins of a former Roman wall alongside the River Itchen, or what remains of William the Conqueror’s castle, where glancing down into the castle ruins, freeing the imagination can almost visualize this once splendid fortress.

The present time loses significance as one is transported back to the grandeur of this once magnificent palace which is partly bordered by the incredibly high medieval city wall, resplendent with crenellations.

I have always been fascinated with places of historical significance and strolling around England’s former capital is no exception. Winchester Cathedral’s majesty and history date back a thousand years and an intrinsic part of England’s heritage.

The Norman invasion in 1066 heralded a significantly inspiring period in the history of England both in faith and architecture. The most dramatic of all is Winchester Cathedral. A reminder of the past and gratitude of the present and encouragement over the centuries to preserve and enhance this magnificent 1000-year-old icon. William the Conqueror was responsible for ‘commissioning’ the building of the Cathedral in 1077.
‎
THE KINGS AND SCRIBES EXHIBITION

Prior to entering the exhibition located in the South Transept, I  walked around the Cathedral, experiencing a tangible sense of peace, harmony, and indeed wonder. ‘Visualizing’  the history, the building, and numerous structural enhancements over 1000 years, the award-winning exhibition is truly awesome.

‎The top floor (Triforium) literally ‘guides one through’ a graphic history from the Roman period; AD400 through to the early kings and queens, King Alfred the Great and, the Danish era and William the Conqueror.

The Exhibition is truly stunning, providing an almost tangible feeling of ‘walking through history’. There are many descriptions and statues which may potentially stimulate the imagination, freeing the heart and mind to wander; transported into the past along a metaphorical pathway. Every corner, every aspect, every view elevates the observer into a different dimension. Overlooking the balcony towards the organ clearly offers such a dramatic perspective. ‎Looking above, below, and indeed all directions, the imagination floats freely.

Walking down the steps (revealing ancient timbers within the stone and brickwork) to other levels of the South Transept provides further insight into Winchester’s remarkable history.

Of note is the George Morely Library, with books dating back to the 1500s. As Bishop of Winchester (born 1598)  the Library is an example of the literary prowess during that era. Also in the library are the awesome Celestial and Terrestrial globes which are truly fascinating and a remarkable statement of knowledge in the 15th century.

Henry de Blois was responsible for the initiation of the 900-year-old illuminated Winchester Bible.  Written in ‘Old Latin’ (Vulgate; translated into Old Latin from Greek Hebrew and Latin). The colors so vivid; vibes so strong and gentle, one can imagine a 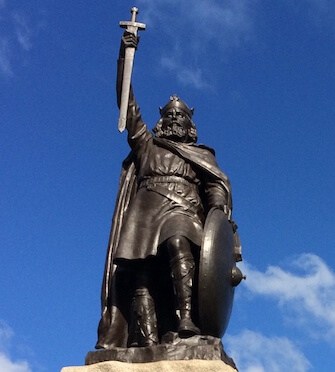 scribe sitting, writing, and illuminating these masterpieces. Scribes would hardly have thought the Bible would be viewed with wonder almost a thousand years afterwards.

Whether for religious inspiration, historical interest, or fascination, this 1000-year-old icon, Winchester Cathedral leaves one positively stunned with wonder. Winchester Cathedral has survived dramatic turbulence during the last 1000 years and remains a model of harmony and peace. Visitors from all over the world, regardless of faith or origin are typically enthralled by the tangible serenity of Winchester Cathedral.

Surrounded by the most beautiful scenery; rivers, Water Meadows, St. Giles’ Hill, and many historic masterpieces, the visitor can only but recognize the historical significance of the City of Winchester; the former capital of England. The birth of a nation.

I could write for hours describing the scale of this historical icon. The incredible fact is, literally from the city center, looking up at King Alfred the Great’s statue, one is taken aback by the proximity of Mother Nature’s gifts. Pristine countryside adorning historically significant structures and of course the world-famous Winchester Cathedral and an exhibition that champions the achievements of this once former capital of England…