A hot Sunday afternoon; blue sky, a few fluffy clouds including a formation resembling a spiral galaxy. The first time I have witnessed such a formation. Such a phenomenon inspired my ‘major league’ walk. A walk I have enjoyed many times; Winter, Spring, Summer, and Fall.

Walking the ‘long way round’ including the Water Meadows, rivers, hills and a Victorian former railway viaduct in the distance.

Even now, on entering The Hospital of St. Cross, visitors are given ‘alms’; bread, and a little glass of ale. The Pilgrims’ Trail is not far away.

On passing by the iconic Hospital of St. Cross, there is a gentle feeling of calm and peace. I noticed there was a garden party on the grounds; refreshing to witness following many months of lock-down.

The Hospital of St. Cross is located alongside the River Itchen and depending on the time of day, shadowed by St. Catherine’s Hill.  One is enveloped in an atmosphere of divine peace and splendor of the most beautiful countryside; including the Water Meadows.

The pathway, lined with an avenue of giant trees, reaches out to the Universe,  is the point where Nature truly blesses the walker with tranquillity and calm of surroundings, releasing often hidden levels of receptiveness to Nature’s significance. Being at one with Nature.

Yes, I have described this walk many times, but each time there is something previously unseen; especially during seasonal changes.

This walk has a particular mission. To once again climb St. Catherine’s Hill.  It is rather hot and walking up a multitude of steps is well……….a little challenging! But, determination and three or four brief pauses and the climb is always worthwhile.  The views from the summit are breathtaking,  including the Hospital of St. Cross and Winchester Cathedral and the River Itchen and distant hills and rolling countryside.

One is greeted by the most splendid copse of trees that almost give the impression they are welcoming those who have taken the effort to see them.  Walking in the copse is an experience itself; surrounded by such beauty, embracing a walker with Nature’s love.

A rather incredible former Iron Age settlement 2,500 years ago, St. Catherine’s Hill has a history of its own. There is a ‘Mizmaze’; one of one eight historic turf mazes still remaining in England. There are no walls; the turf being laid out where you can walk along its meandering ‎ground-level maze near the copse.

Regardless of the times, I have climbed St. Catherine’s Hill, there is a feeling of amazement; bordering on excitement.

Thoughts and imagination drift the mind and heart to times past. Regardless of the season; Winter, Spring, Summer, or Fall, visitors are embraced in a canopy of splendor.

Sunshine drifting through the rather majestic canopy of trees transports you to a different level of awareness; of consciousness. Looking up at the treetops, you are elevated to a different plateau of existence. On reaching the summit, energized rather than fatigued. Well worth it when greeted by truly wonderful views; makes you want to fly……..or do so in the mind’s eye and heart’s flow of surreal energy.

Talking of flying, walking down the other side of St. Catherine’s Hill, I did indeed nearly go flying! Rough chalk, tree roots, and a flying Englishman; well, a foot off the ground maybe! Eventually, there is a railway bridge; once a busy line until a decision to close it down many years ago.

Those who have braved the walk up St. Catherine’s Hill are rewarded by the sight of what appears to be a railway carriage on top of the bridge.‎ However, many people are enjoying the most delicious cakes and coffee that are truly awesome! 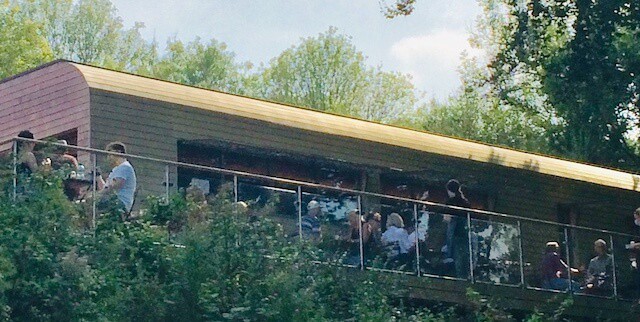 Designed by a student and built by an enthusiastic team including a Polish chap, a Hungarian, and a Romanian‎, it indeed echoes the shape of an early railway carriage, made of wood. Following a walk I used to drop by and chat to these fellows, who were always keen about their construction work, describing building methods.

Another, smaller carriage structure is designed for minor bicycle repairs; punctured tires for example. Hence ‘Handlebar Café’. Mostly,  café for lovers of walking through tree-lined countryside and rivers in need of refreshment.

Sitting outside in sun or shade (this time, shade!) friendly staff present a menu where you are spoilt for choice; all freshly prepared. My favorite is a double espresso. I order a double Rocket Fuel‎, where the description lights up the face of ‎ ‎a friendly member of staff. And then a tough choice. Which cake to order. Usually, it is a lemon drizzle sponge. This time, because the weather is hot, a dark chocolate cake is called for. Well, that’s my excuse anyway!

While waiting for this delicious treat, I relax and take in the spectacular views over the River Itchen, Pilgrims’ Trail, Winchester College’s playing fields, pristine lawns.

On departing this truly iconic masterpiece of creative design, that attracts visitors riding bicycles or walking along the pathway below, it is time to continue my walk along beside the River Itchen (as I always say. Poet Keats’ favorite walk) alongside Pilgrims Trail.

On the left is the Itchen, dogs flying through the air (not me!!) to cool themselves in the water, and on the right, many families enjoying the vast space and pristine lawns chat and relax.  Floating down the clear waters, some people stand upon small rafts, long oar in hand, reflecting a vision of Venice.

People are friendly; especially dog walkers who enjoy watching their hounds swimming in the river. We chat about their enjoyment of the location. ‎Some who have visited for the first time are so taken aback by the marriage of history, beautiful countryside, river walks, and yes, perhaps the best coffee this side of Milan!

Everyone I meet says how lucky we are to live on the doorstep of such wonderment. I wholeheartedly agree. Such a combination of rivers, Water Meadows, Hills and countryside and in addition, only minutes away from Winchester City’ once England’s former capital.

I hope you have joined me on this walk, experiencing the wonderment, calm, excitement, joy of views, a sense of belonging to Mother Nature’s gift.