A Public Apology to My Neighbors

The last few weeks have been challenging, to say the least.  Like most of us, I’m doing my best to stay healthy, create some kind of structure in my days, and manage the stress of the uncertainty that lies ahead.  All of my professional engagements have been cancelled, and I worry about how I’ll make up that income. In addition to all that, I’ve been hypervigilant to keep my elderly parents safe at home and make sure they have everything they need.  My worry, fear, and stress buckets are full.

So last night as I sat on my lanai listening to my neighbors enjoy a “social gathering” for the second weekend in a row, it rankled me. Oh, alright…it pissed me off. And as the evening wore on, my patience wore thin. And so, I made a comment on our community Facebook page.

Now before you write me off as that neighbor, you should know that I’m rarely on Facebook.  I don’t post about dog poop in my yard, the management company, the landscapers, the security gate or lack thereof, or the hours of operation at the restaurant. In fact, the last time I posted was an expression of gratitude.  I don’t believe I have ever posted a negative comment or complaint about my neighbors or community because I think we live in one of the prettiest places on the planet. 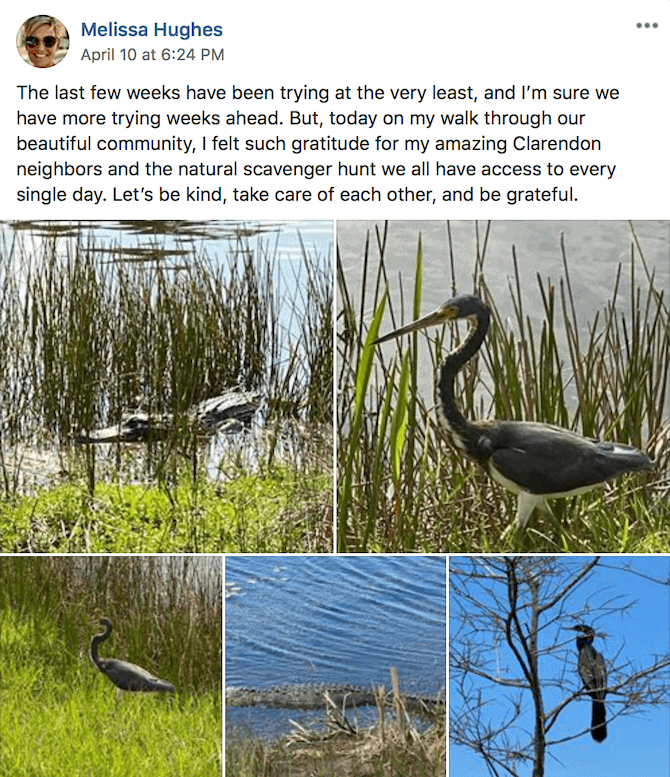 But, last night I commented about the social gathering across the water.

A few residents shared their views and just like that, it turned into the Naples edition of “Torches and Pitchforks.” To be completely honest, I do think it was selfish and irresponsible of my neighbors to carry on socially while the rest of us are making the necessary sacrifices to slow the spread and flatten the curve. But I should have kept quiet.

Because what they do isn’t really my business… is it? I mean, if just a few people in the hood have a little get-together with 6 or 8 neighbors, that wouldn’t be a big deal.. would it? The rest of us can pick up the slack on social responsibility, right? I’m sorry that’s not how infectious diseases work. Wouldn’t that be great, though?

Every instance of people not following the guidelines negates the efforts of those of us who are. Even so, I should have kept my thoughts to myself.

I wonder if 34-year old Li Wenliang was sorry he said something in December to warn fellow medics about the outbreak in China.  Three days later the police paid him a visit and told him to stop. He was one of eight people who police were investigating for “spreading rumors” and “causing alarm that severely disturbed the social order.”

The letter from the Chinese police ordered him to “calm down and reflect on his bad behavior. He returned to work and caught the virus from a patient he was treating for glaucoma. He had no idea she was infected with the virus. He died after spending three weeks in the hospital.

As long as I have your attention, I feel compelled to share a few more sorry thoughts…

To the neighbor who called me the “Gestapo” or the one who told me to “chill out, the world isn’t coming to an end and people are allowed to have some fun,” I’m sorry I am so worried about people not heeding the real-time warnings from New York City like the folks in New Orleans who wouldn’t be denied their Mardi Gras celebrations. That “Coronavirus Can’t Kill our Party” attitude has earned New Orleans a death rate per-capita double that of New York City, according to a troubling new report. The parish of Orleans, which encompasses the Big Easy, saw a coronavirus death rate of 37.93 per 100,000 people as of Friday, April 10.

To the neighbor who said this is all an overreaction anyway, I’m sorry I keep thinking about how people reacted when the virus first arrived in our country. “So last year 37,000 Americans died from the common Flu,” President Trump tweeted on March 9. “It averages between 27,000 and 70,000 per year. Nothing is shut down, life & the economy go on. At this moment there are 546 confirmed cases of CoronaVirus, with 22 deaths. Think about that!”

But, I’m sorry I said anything.

To the neighbor who said that “quarantining was for the sick not the healthy,” I’m sorry that we are so bad at assessing risk. But it’s especially true in the case of the coronavirus because it’s about our risk to others, and that might make it a little more difficult to understand.

Our judgment is often clouded by optimism bias, the tendency to believe you are less likely than others to experience something negative. In late February, researchers polled 4,348 people in France, Italy, the United Kingdom, and Switzerland and found the vast majority believed they were less likely to get the coronavirus than others when the numbers were staggering. Another poll conducted in mid-March on people from the US, the United Kingdom, and Germany substantiated people’s belief that their risk of contracting the virus is inherently lower than their peers.

I’m sorry so many people don’t understand that wearing a mask and gloves at the grocery store is meant to protect others, not themselves.

I’m sorry that until we all have access to testing, we each must behave as if we have the virus.

I’m sorry that no one is immune.

To the neighbor who said he’s doesn’t know me and he’s going to make sure to keep it that way, I’m sorry you feel that way. And I’m sorry that so many of my neighbors see my worry, concern, and stress as a personal affront. It’s not meant to be. But when so many of us are trying to stay healthy while also caring for more vulnerable folks around us, that small gathering across the water was the equivalent of a big, fat “F—k You!” But, I’m sure it wasn’t meant to be.

Social-distancing is a sacrifice no doubt, but we should be embracing it as an act of selflessness, a decision made not just to protect yourself but to protect your friends, your parents, your friends’ parents, the guy stocking the shelves at the grocery store, and potentially everyone each of those people come into contact with. Stopping the disease’s spread is a team effort, and one where the best way to take care of each other is by staying home.

To all of my neighbors who are afraid to say anything to people who “have the right to have fun” and who “will not stop living their lives,” I get it. It doesn’t feel good to be attacked. I’m guessing it feels worse to see the most vulnerable among us sick, hospitalized, and dying via FaceTime.

But, this whole thing is probably nothing.