A Day in the Life of a Bumblebee

Bumblebees are particularly large. Ability to fly contrary to laws of science, where size and weight should in theory prevent them from being airborne. A dream rather than a reality, a dream becomes a reality.

It is said that the species is in fact ‘humblebee’ because they apparently don’t sting.

Such insects (sounds awfully insulting) are quite special to observe. Compared with other honey-gatherers, bumblebees are rather gentle in their everyday manner. They hover over a chosen flower, humming until landing on a chosen bloom. Creeping inside to gather pollen, re-emerging with a leg-load.

When fully grown, they are enormous and susceptible to ‘crash land’ where too much weight ultimately fails to keep them aloft.‎ They can be seen with a large amount of pollen on one or more of their legs.

Bumblebees and honey bees have specific choices of flowers, meaning they do not always share the same ‘taste’. There is no conflict; just a polite acknowledgment that a wrong flower had been chosen and one of them departs. They are rarely seen on the same bloom together. Fellow bumblebees enjoy a flower together, should there be sufficient space; especially for the large, fully mature ones.

There is another creature happy to share a bloom with a bumblebee; that being a butterfly. Such species could not be more different. Butterflies; their regal grace blessing the company of what would be a rather noisy fellow; where each change of position would make a flower shudder a little. Considering their total difference, there is a low-key camaraderie. 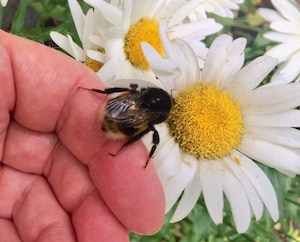 A particular giant wearing shoes has been seen offering a hand of friendship, where after a pause to evaluate whether a sensible thing to do, a bumblebee lifts a leg in either a salute or caution, ultimately accepting such an invitation and crawling upon an offered hand many times larger than can be imagined ‎by such a creature. The shadow alone blocks out direct sunlight; sunshine being a crucial element in a bumblebee’s life.

Being offered a flower that is unsuitable, a bumblebee turns around and crawls away up a human’s hand (insulted at being offered a bloom below its status?) and ultimately accepts another flower, leaving an empty hand. Perhaps a wave of thanks should imagination permit.

Butterflies are a regal, gentle species. A butterfly and a bumblebee gracing the same flower‎ does not create tension of competition. Perhaps a slight nod to recognize mutual rights of temporary ownership.

Imagine a bumblebee sitting on a human hand, receiving a gentle nudge to prompt it to climb onto a flower.

Do bumblebees sting? Perhaps ‘rescuing’ a bumblebee neutralizes any idea of stinging a human who has saved them.

With Winter now very close, there are no suitable flowers and consequently an absence of bumblebees and butterflies. In their own way, they are preparing for Spring, renewing their instinctive efforts to bless Nature and humanity. Life without honey?