Where were you 18 years ago when the planes hit the World Trade Center?

I vividly recall that nightmarish day. Some of my co-workers and I watched the tragic situation unfold on TV after the first plane struck. We all thought this was a terrible accident, as did the national newscasters. The disturbing scene of billowing smoke high over the skyline of lower Manhattan looked like the aftermath of a bomb blast.

How could this have happened, we wondered?

How could a commercial jetliner crash into one of the most iconic buildings in America? It was a perplexing question, but not for long. It was obvious this was no accident after the second plane hit. Rather, it was the worst attack on the American homeland since Pearl Harbor was bombed by the Japanese during World War II.

President Roosevelt called the Pearl Harbor attack, “A date which will live in infamy.” The same can be said of 9/11.

My office at the U.S. Equal Employment Opportunity Commission (EEOC) was near the White House. The EEOC was evacuated as rumors spread about other planes targeting Washington. Then another jetliner flew into the Pentagon. Fear spread. Panic ensued. People were stunned.

A nightmare became reality: the USA was under attack! 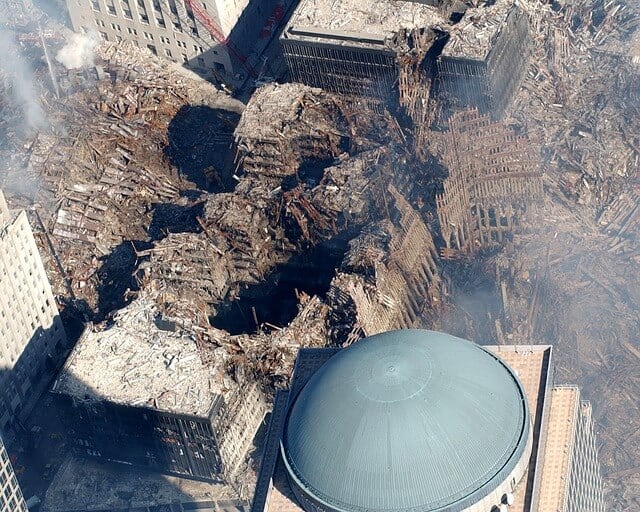 I was concerned about my co-workers in EEOC’s New York District Office, which was located in an auxiliary building of the World Trade Center complex. Fortunately, everyone was safely evacuated. Then the Twin Towers fell. Bystanders scampered for cover. A colossal dust cloud engulfed the area for blocks. Later, our New York office crumbled to the ground.

One of my coworkers there told me a story about the man in a red suit. The story epitomized the horror of the day. Larry observed some of the trapped employees jumping from the higher floors of the World Trade Center as walls of flame drew near. But Larry couldn’t get one person out of his mind: the man in the red suit who was in free fall.

Why, Larry asked himself, would anyone wear a red suit in New York City’s financial district? It didn’t make any sense amid all the death and destruction.

Larry was haunted by this sight and couldn’t stop thinking about it. He was plagued by recurring nightmares until learning the truth in therapy. The man Larry watched jump was not wearing a red suit. He was on fire plummeting to his death. The man had appeared as a flash of red to Larry. This looked like a red suit in his traumatized state. Larry’s mind had played tricks as he struggled to process the horror — like so many others who bore witness to that fateful day. We must always remember the countless families and friends who lost loved ones. Their pain is everlasting.

America must never let her guard down again — and with good reason.

Those who cannot remember the past are condemned to repeat it.