6 Habits That Will Make You More Influential

Few skills are as valuable as influence. Trying to get a promotion or a raise? You’ll need influence. Aiming to become a better leader and earn the trust of your team? Yep, you’ll need influence for that too. The concept even applies to your personal life — just ask any mom who’s ever successfully managed to get a fussy toddler out the door on schedule. The Oxford dictionary defines influence as “the capacity to have an effect on the character, development, or behavior of someone or something, or the effect itself.” Having influence is basically like having a superpower.

And if you think it’s a dirty word, think again. It’s all about how you direct that power. “I like to say it’s like electricity or nuclear power and it can be used for good or ill,” says best-selling author and influence expert Elaina Zuker whose book The 7 Secrets of Influence sold 150,000 copies and has been translated into six languages.

I have to ask myself: What are my intentions? Are my intentions honorable when I’m attempting to influence a person? Am I intending to give them some benefit or added value? And the other measure is, what is the effect on the other person? Do they feel used or exploited?

Ready to become a master influencer and reap the many career and life benefits of developing the sought-after skill of influence? Adopt the six habits below and learn how to get your way more often than not.

Being a good listener and observer

“The best influencers are people who listen more than they talk,” says Zuker. “What they’re doing is absorbing information about the other person.” So, why is paying attention and gathering intel so important when it comes to building influence? Because it allows you to understand the larger context and dynamics of a situation, which is critical in terms of influencing it. The more you know about what someone might need or what they value, the better informed you’ll be to move your agenda forward.

Plus, you need to figure out who to influence in the first place. For example, Zuker recalls pitching a high-profile client and scanning her audience to identify the most important decision-makers through cues like body language. 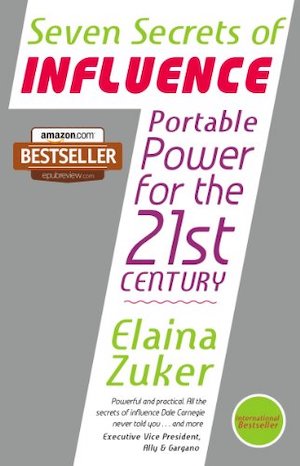 “There are people who are natural influencers and even if they’re good at it, they don’t specifically know what they do and how they do it. So it’s not that helpful,” says Zuker, who has broken down six different influence styles in her signature influence-building framework. For example, some people are more analytical and tend to use facts to convince others, while others are visionaries who like to paint an ideal picture and focus on the emotional resonance of their message.

Understanding your influence style allows you to accomplish a few things: Intentionally direct and leverage your influence skills, identify areas of improvement so you can become an even more powerful influencer, as well as become more aware of the influence styles of others and use that information to your advantage.

Excellence is about precision and intentionality. Think of it as being an athlete training for the Olympics. You’d practice for hours and work with your coach to know your strengths and weaknesses inside out. So when it comes to influencing, adopt the approach of continuously gathering insights from your experiences and you’ll be unstoppable.

“Let’s say you have gone through life and been successful. You might have thought it was an accident or just good luck. You may not be able to duplicate a success or fix a failure because you don’t know what the ingredients and building blocks of what you did were,” says Zuker.

So don’t leave your moments of influence up to luck. Review what went well and what didn’t go so well, then step your game up. And learn from observing other influencers — they can be a great source of insights as well.

Balancing out your weaknesses

Let’s say you understand where your influential strengths lie, and you are able to lean on them when you need them the most. Now what? “Now you’re going to stretch and learn the style that you’re not comfortable with so that you can have it on tack when you need it,” says Zuker, who makes sure people in her workshops practice the styles they are less familiar with to round out their skills.

And so you’re not functioning just intuitively but strategically. You’re already good at what you do. You can maybe teach it to others or use it when it’s called for, but you’re maybe missing out on five of the other possibilities or methods.

The most influential people in the world can adapt in real-time to situations where influence-wielding will be required (which happens on the daily!).

Imagine you are pitching a project or service and the people who you thought would attend the meeting are absent. Now you’re faced with an audience you don’t know and have not prepared for. You can quickly get information about them through an informal pre-presentation conversation, which also allows you to warm up the room, then adapt your pitch to speak their language and address their main concerns. This is what advanced influencing can look like in action.

Practice makes perfect. And if the thought of influencing others makes you feel overwhelmed, don’t despair. Zuker says anyone can learn the skill. Start by flexing your influence muscles in low-stake situations or even outside of work. “I used to invite friends over and make them pretend to be students,” she says. Anyone can learn, practice, and master these simple, but powerful skills.

Anouare Abdou is a career expert, writer, and entrepreneur who started her career as a lifestyle journalist before stepping into leadership roles at publications like AskMen and Goalcast. From managing editorial teams to producing video content and leading business operations, she has tackled various challenges in digital media and discovered her passion for management in the process.

Editor’s Note: This article originally appeared on Ladders and is featured here with permission.